Ex 12.3 Class 10 RBSE Question 1.
Write true/false for each (RBSESolutions.com) and give answer with reason.
(i) Angle subtended by the chord at any two points on the circle are equal.
(ii) In figure, if AB is diameter of circle and C is any point on circle, then AC2 + BC2 = AB2 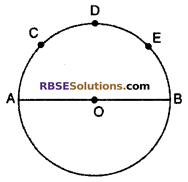 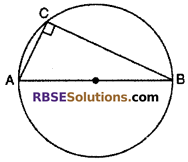 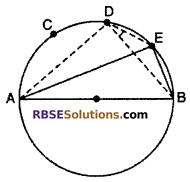 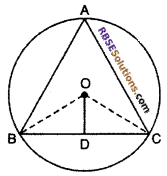 RBSE Solutions For Class 10 Maths Chapter 12 Question 4.
If two triangles ∆ACB and ∆ADB are drawn (RBSESolutions.com) on both sides of common hypotenuse AB, then Prove that ∠BAC = ∠BDC.
Solution :
Taking AB as diameter, draw a circle which passes through points C and B 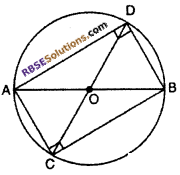 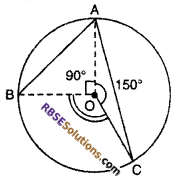 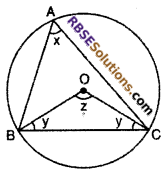 Chapter 12 Class 10 Maths RBSE Question 7.
A chord and radius of a circle are equal. (RBSESolutions.com) find the angle subtended by this chord in major segment at any point
Solution :
Let AB is chord of circle chord AB = radius OA radius OB
∆AOB is an equilateral triangle
⇒ ∠AOB = 60° 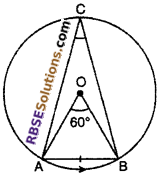 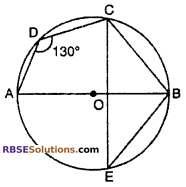 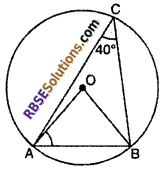 Class 10 Maths Chapter 12 Exercise 12.3 Question 10.
In figure, AOB is diameter of circle and C,D and E are (RBSESolutions.com) any three points on semicircle find ∠ACD + ∠BED 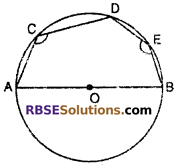