RBSE Class 10 Science Chapter 3 Question 2:
Mendel conducted his experiments on which of the following?
(a) Sweet pea
(b) Wild pea
(c) Garden pea
(d) All of these
Answer:
(c) Garden pea

Chapter 3 Class 10 Science RBSE Question 3:
What is the name of the branch of science (RBSESolutions.com) which deals with heredity and variations?
(a) Heredity
(b) Geology
(c) Forestry
(d) None of the above
Answer:
(a) Heredity

RBSE Class 10 Science Chapter 3 Genetics Question 7:
Which term is used for cross of any one (RBSESolutions.com) parent with F1 generation?
(a) Reciprocal cross
(b) Test cross
(c) Back cross
(d) All of these
Answer:
(c) Back cross

Genetics Class 10 RBSE Question 13:
What is a dominant trait?
Answer:
A trait which expresses itself in F1 generation is called the dominant trait.

RBSE Solution Class 10 Science Question 14:
Which term is used for transfer of genetic traits (RBSESolutions.com) from one generation to next generation?
Answer:
Inheritance

Science Class 10 Chapter 3 Question 18:
What is test cross?
Answer:
When F1 generation is crossed with parent with recessive traits, it is called a test cross.

Www.RBSEsolutions.Com Class 10 Question 19:
What do you understand (RBSESolutions.com) by out cross?
Answer:
When F1 generation is crossed with its parent’s generation with dominant traits it is called out cross.

RBSE Solutions For Class 10th Science Question 21:
What is the difference between phenotype (RBSESolutions.com) and genotype?
Answer:
The set of observable traits is called phenotype, while the genetic constitution is called genotype. Two plants with the same phenotype may have different genotype.

RBSE Solution 10th Class Science Question 22:
Briefly explain dihybrid cross.
Answer:
When two pairs of contrasting traits are studied in a cross, it is called dihybrid cross. For example; when a pea plant is studied for its flower’s colour and pod colour it is a dihybrid cross.

RBSE Solution For Class 10 Science Question 25:
Write a brief biography of Mendel.
Answer:
Mendel was bom on 22nd July 1822 in Silision village of Heizendarf province in Austria. After taking a degree in philosophy (1842), he joined as a priest in a church at Brunn in Austria. He began his study on garden pea in church’s garden and continued his studies for seven years.
He presented his findings in the form of research paper in front of Brunn Society of Natural History. His paper was published in the annual magazine of the society.

RBSE Solution Science Class 10 Question 26:
Explain the Law of Dominance as proposed (RBSESolutions.com) by Mendel.
Answer:
When a pair of contrasting characters is crossed then only one of the characters is expressed in Fj generation. This is called law of dominance. 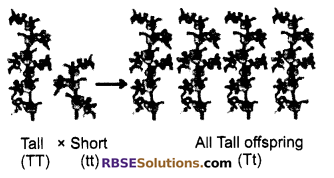 For example; when a homozygous tall plant (TT) is crossed with a homozygous short plant (tt), then all the plants of F1 generation are tall (Tt) because tallness is the dominant character.

RBSE Solutions Of Class 10th Science Question 28:
Explain Mendel’s Law of Segregation with (RBSESolutions.com) suitable example.
Answer:
Law of Segregation: This is also known as law of purity of gametes. As per this law, during the gametogeneis of heterozygous plant, each gene of a pair of allele goes to different gametes. Because of segregation of genes of a pair of alleles, it is called the law of segregation. 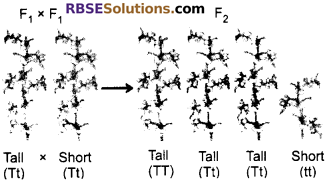 RBSE Solution Of Class 10th Science Question 29:
What is Mendelism? Explain the law of independent (RBSESolutions.com) assortment.
Answer:
The Laws of inheritance were derived on the basis of finding by Mendel. These laws are collectively called Mendelism.

Example: Let us take example of dihybrid cross between a plant with round and green seeds (RRyy) and another plant with wrinkled and yellow seeds (rrYY). Here roundness or smoothness of seeds and yellow colour are dominant traits, while wrinkles on seeds and green colour are recessive traits. 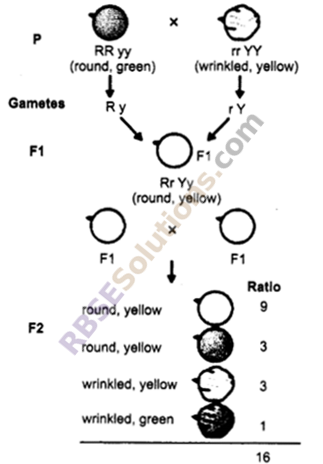 When these plants were crossed then all plants in F1 generation produced round and yellow seeds. When plants of F1 generation were allowed to reproduce, plants of F2 generation showed following traits in respective ratio:
Round yellow : Round green : Wrinkled yellow : Wrinkled green
9 : 3 : 3 :1
The observation that roundness combines with either of the colours and roughness combines with either of the colours proves the law of independent assortment.

Law of Dominance: When a pair of contrasting characters is crossed then only one of the characters is expressed in F1 generation. This is called law of dominance. For example, when a homozygous tall plant (TT) is crossed with a homozygous short plant (tt), then all the plants of F1generation are tall (Tt) because tallness is the dominant character.

Law of Segregation: This is also known as law of purity of gametes. As per this law, during the gametogeneis of heterozygous plant, each gene of a pair of allele goes to different gametes. Because of segregation of genes of a pair of alleles, it is called the law of segregation.
For example, when a homozygous tall plant (TT) is crosses with a homozygous short plant (tt), all the plants of F1 generation are tall plants (Tt) but heterozygous. But during the combination of genes in F1 generation, one gene does not pollute another gene and each gene maintains its purity. Due to this, when plants of F1 generation are allowed to produce the next generation, the recessive character, i.e. shortness expresses itself.

Science Chapter 3 Class 10 Question 1:
Define heredity.
Answer:
Heredity deals with the inheritance of characters from one generation to the next.

Chapter 3 Of Science Class 10 Question 2:
Define variations.
Answer:
Variations are differences that occur between (RBSESolutions.com) the organisms of the same species in spite of the same basic feature.

RBSE Solutions For Class 10 Science Hindi Medium Question 3:
What is a trait?
Answer:
A characteristics feature is called a trait.

RBSE Solutions 10 Science Question 5:
What is a gene?
Answer:
Gene is the unit of inheritance. It is a part (RBSESolutions.com) of the chromosome which controls the appearance of a set of hereditary characteristics.

Class 10 Science Chapter 3 Question Answer Question 6:
What is genetics?
Answer:
The branch of biology in which we study about heredity and variations in living beings is called genetics.

Ch 3 Science Class 10 Question 10:
What are alleles?
Answer:
Two forms of genes which control any (RBSESolutions.com) one trait are called alleles or allelomorphs.

Define Genetics Class 10 Question 11:
What do you understand by homozygous?
Answer:
When both the forms in an allele for a trait are same, the pair is called homozygous, e.g. TT or tt.

Question 12:
What do you understand by heterozygous?
Answer:
When two forms in an allele for a trait are different the pair is called heterozygous, e.g. Tt or Yy.

Question 16:
What is dihybrid cross?
Answer:
When a cross is done to study two pairs of (RBSESolutions.com) contrasting characters, it is called dihybrid cross.

Question 1:
What term did Mendel use for genes? Where are the genes located?
Answer:
Mendel used the term ‘factors’ for genes. Genes are portions of DNA which code for a single protein.

Question 3:
A true breeding tall plant is crossed with a true breeding short plant. All the off springs of the F1 generation are tall. Of these two characters which one is dominant and which is reverse.
Answer:

In the allele of F1 generation there are both traits viz. T (tall) and t (short) but the F1 generation is tall hence, it is the dominant character while t (short) is the recessive character.

Question 4:
The tall plant of the F1 generation with (RBSESolutions.com) allele, Tt is selfed. What is the outcome or ratio of the F2 progeny?
Answer: 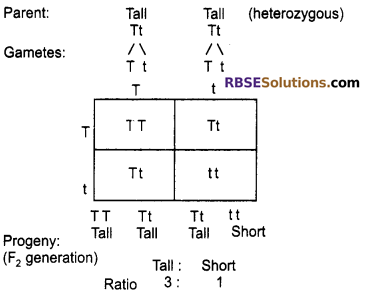 Question 5:
Define Genetics. What did Mendel’s (RBSESolutions.com) contributes to the genetics?
Answer:
The science of heredity and variation is called Genetics.
Mendel conducted breeding experiments in a plant called garden pea (pisum sativum) with contrasting pair of characters, found that only one character of the pairs appeared in the first generation but both the characters appeared in the subsequent generation. On the basis of these results of his experiments he put forth the various principals of inheritance. He also suggested that each character is controlled by a pair of factors which are now called as genes. 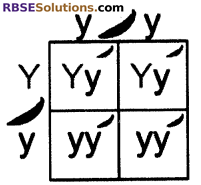 Question 1:
(i) What is (RBSESolutions.com) genetics?
(ii) Give the common name of the plant on which Mendel performed its experiments.
(iii) What for did Mendel use the term factors and what are these factors called now?
(iv) Green and red coloured seeds are recessive and dominant trait respectively. Out of F1 and F2, in which generation will the green seed appear, if both parents are not hybrid.Green and red?
(v) What is monohybrid cross?
Answer:
(i) Science which deals with the study of heredity and variations is called genetic.
(ii) Pea plant.
(iii) Mendel used the term factors for ‘genes’.
(iv) F2 generation
(v) When inheritance of only one character is studied during hybridisation is a called monohybrid cross.

Question 2:
How do Mendel’s experiments show (RBSESolutions.com) that the (a) traits may be dominant or recessive, (b) traits are inherited independently.
Answer:
(a) When Mendel crossed pollinated pure tall pea plants with pure dwarf pea plants, only tall plants were obtained in F1 generation. On self pollinating the F1 progeny, both tall and dwarf plants appeared in F2 generation in the ratio 3 : 1. Appearance of tall character in both the F1 and F2 shows that it is a dominant character. The absence of dwarf character in F1 generation and its reappearance in F2 shows dwarfness is the recessive character.