RBSE Class 12 Chemistry Chapter 1 Question 2.
A compound is formed by the crystallisation of A and B in cubic close packing where atom A is arranged at the corners of cube and atom B are arranged at the center of each faces. The formula of compounds is-
(a) AB
(b) A2B
(c) AB2
(d) A2B3

RBSE Solutions For Class 12 Chemistry Question 5.
Which of the following anion has higher co-ordination number?
(a) NaCl
(b) ZnS
(c) CaF2
(d) Na2O

Class 12 Chemistry RBSE Solutions Question 1.
Why solids are hard?
Answer:
In solids the positions of constituent particles like atoms or molecules or ions are fixed i.e., they are not free to move. They are stationary in their fixed position. They have strong intermolecular or interionic forces of attraction. Hence solids are hard.

RBSE Solutions For Class 12 Chemistry Chapter 1 Question 3.
Solid A is very hard, electrical insulator is solid as well as in molten state of extremely high temperature. What type of solid is it?
Answer:
Covalent or network solids like SiO2, (quartz) or SiC or C (diamond).

Chemistry RBSE Solutions Class 12 Question 6.
Name the parameters which are characterize a unit cell.
Answer:
A unit cell is characterized by the following six parameters:
(i) The dimensions of the unit cell along three edges. They may be or may not be perpendicular.
(ii) The angles between the edges. These are represented by αß and y. a (between b and c), ß between a and c), 7 (between a and b). 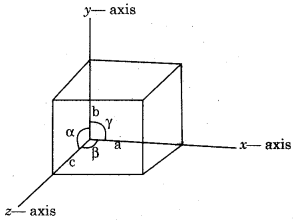 RBSE Solutions 12 Chemistry Question 9.
Describe the term “amorphous’. Give a few examples of amorphous solids.
Answer:
Amorphous solids are those solids in which the constituent particles may have a short range order, have irregular shape and isotropic in nature. They do not show clean cleavage. They do not have sharp melting points and do not have definite heat of fusion.
Examples: glass, plastics and rubber etc.

RBSE Solutions For Class 12 Chemistry Chapter 1 Question 2.
Why is glass considered a super-cooled liquid?
Answer:
Glass is an amorphous solid. Like liquid it has a tendency to flow, though very slowly. Because of its flowing nature the glass panes in the windows of old buildings are found to be slightly thicker at the bottom than at the top. Hence glass is consider as super-cooled liquid because of its flowing nature.

RBSE Solutions For Class 12 Chemistry In Hindi Question 3.
Refractive index of a solid is observed to have the same value along all directions. Comment on the nature of the solid. Would it show cleavage property ?
Answer:
As the solid have same values of refractive index among all directions, it means it is isotropic in nature. Hence, the solid is amorphous. As the solid is amorphous in nature so it would not show clean cleavage when cut with a knife. It would break in to pieces with irregular surfaces.

= 3.99 = 4
Thus there are 4 atoms of the element present per unit cell. Hence the cubic unit cell must be face centered or cubic close packed (ccp).

12th Chemistry RBSE Book Question 10.
Explain how vacancies are introduced in an ionic solid when a cation of higher valency is added as an impurity to it?
Answer:
Two or more cations of lower valency are replaced by a cation of higher valency to maintain electrical neutrality. Hence some cation vacancies are created. For example : In an ionic solid ‘NaCl’, if impurity of Sr2+ is added (as SrCl2) then two Na+ ions left thus lattice sites. To maintain electrical neutrality one lattice site is occupied by Sr2+ ion while other lattice site will remain vacant.

RBSE Class 12 Chemistry Solutions Question 11.
Ionic solids, which have anionic vacancies due to metal excess defect, develop colour. Explain with the help of a suitable example.
Answer:
When NaCl crystals are heated in the presence of sodium vapour some chloride ions left the lattice sites and combine with sodium to form NaCl. For this combination sodium atoms lose electrons to form Na+ ions. The released electrons diffuse into crystal to occupy the anion vacancies which are created by Cl– ions. In this condition the crystal have excess of sodium. The sites occupied by unpaired electrons are called F-centres or colour centres.
F-centre imparts yellow colour to NaCl crystal because they absorb energy from the visible light and get excited.

Solid State Class 12 Question 13.
What makes a glass different from a solid such as quartz? Under what conditions could quartz be converted into glass?
Answer:
Glass is an amorphous solid while quartz is crystalline solid. Glass has short range order while quartz has long rage order. On melting quartz and then cooling it rapidly, it is converted into glass. 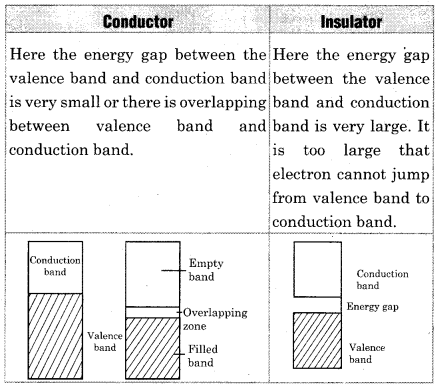 (ii) Difference between conductor and semiconductor 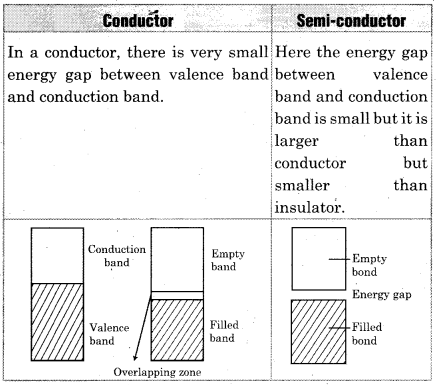 Chemistry Notes Class 12 RBSE In Hindi Question 19.
The stability of a crystal is reflected in the magnitude of its melting point”. Comment. Collect the value of melting point of water, ethyl alcohol, diethylether and methane from the data given in the book. What can you say about the inter molecular forces between these molecules?
Answer:
Higher the melting points, greater will be the forces of attraction between the molecules or constituent particles and hence greater will be the stability. The melting points of given compounds are as follows.
Water            = 273 K
Ethyl alcohol = 155.7 K
Diethyl ether = 156.7K
Methane       = 90.5 K
The inter molecular forces of attraction between the molecules of water and ethyl alcohol are mainly due to hydrogen bonding. The melting point of water is higher than ethyl alcohol shows that hydrogen bonding in ethyl alcohol molecules is not as strong as in water molecules. Diethyl ether is a polar molecule. The inter molecular forces present in them are dipole-dipole interactions Methane is a non-polar molecule. The only forces present in them are the weak vander waals forces i.e., London dispersion forces.

(ii) Face centred tetragonal:It also has 14 lattice points and the number of constituent particles is 4. 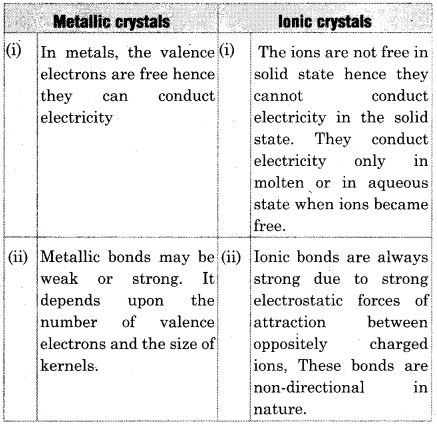 (b) Ionic crystals are hard because the strong electrostatic forces of attraction are present in between the oppositiely charged ions. They are brittle because ionic bonds are non-directional in nature. 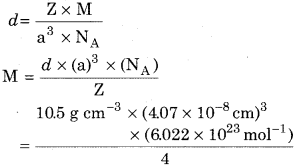 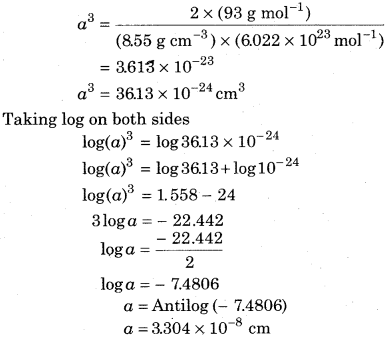 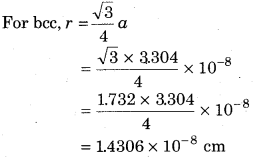 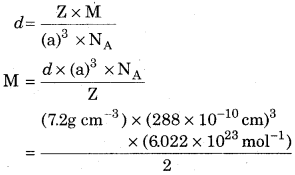 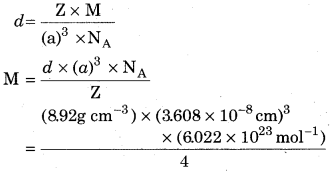 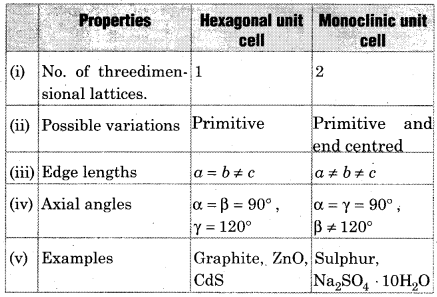 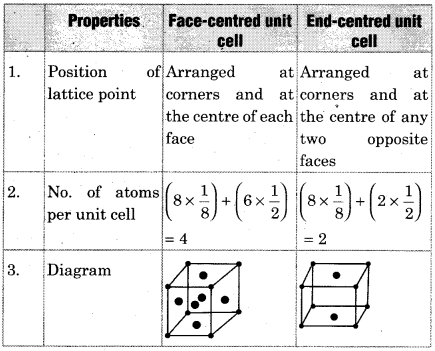 Question 3.
What type of defect can arise when a solid is heated? Which physical property affected by it and in what way?
Answer:
When a solid is heated, vacancy defect is produced in the crystal. Because on heating. some atoms or ions leave the lattice sites completely i.e., some lattice sites become vacant. As a result of this defect, the density of the substance decreases because some atoms/ ions leave the crystal completely.

Question 5.
How can you determine the atomic mass of an unknown metal if you know its denisty and the dimensions of its unit cell? Explain your answer.
Answer: 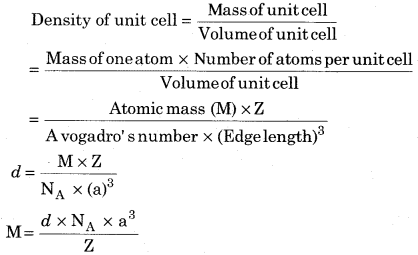 If we know the value of density of any unknown metal and dimensions of unit cell then with the help of above – formula we can calculate the atomic mass of that metal. 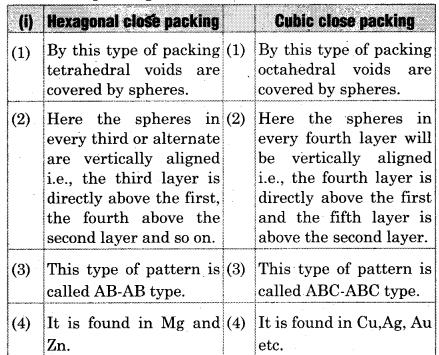 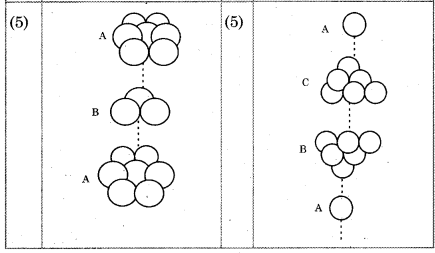 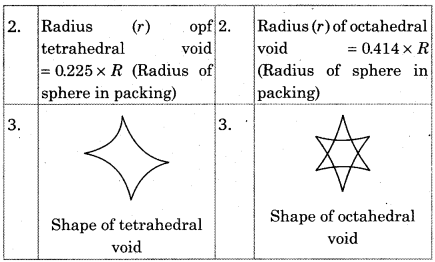 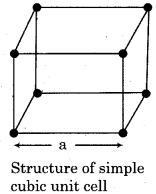 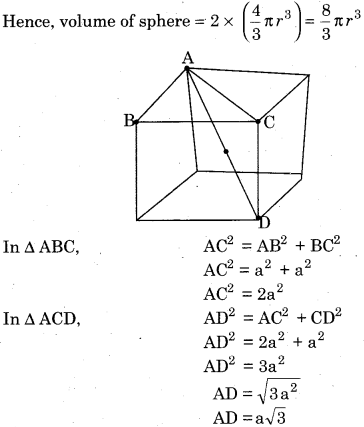 It we see the arrangement of spheres in AD then 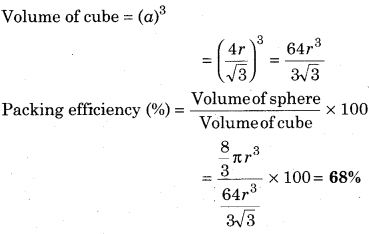 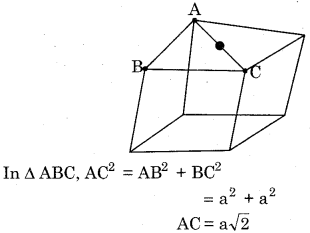 If we consider AC then. 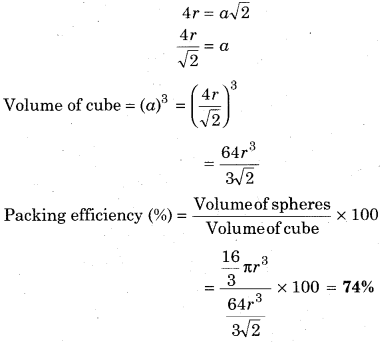 In the above given structure ABC is right angle triangle, 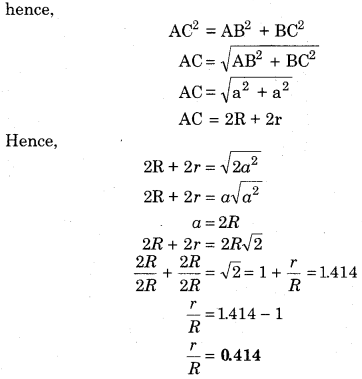 (1) n-type semiconductors:
This type of conductors are formed by the doping with electron rich impurities. Group 14 elements like silicon and germanium has 4 valence electrons in the valence shell. So they form four covalent bonds with the neighbouring atoms. When they are doped with group 15 elements like P or As, then some silicon or germanium atoms are substituted by them. As these atoms have 5 electrons in the valence shell, then after forming normal four covalent bonds with the neighbouring silicon atoms the fifth extra electron is free and get delocalised. These delocalised electrons increase the conductivity of silicon or germanium. As the increase in conductivity is due to negatively charged electrons, the silicon or germanium crystals doped with electron rich impurities are called n-type semiconductors.

(2) p-type semiconductors:
This type of semionductor is formed by the doping with electron deficient impurities. Group 14 elements like silicon and germanium has 4 valence electrons in the valence shell so they form four covalent bonds with the neighbouring atoms. When these are doped with group 13 elements like galium (Ga), indium (In) then some silicon or germanium atoms are substituted by them. As these atoms have 3 electrons in the valence shell so they can form only 3 bonds with neighbouring atoms. Thus a hole is created at the site where fourth electron is missing, this is called electron hole or electron vacancy. An electron from the neighbouring atom can jump to fill up this electron hole but then an electron hole is created at the site from where elecrtron has jumped. As it continues, the electron hole will move in a direction opposite to that of the flow of electrons. Now when electric field is applied, the electrons move towards the oppositiely charged plate and the electron hole move towards the negatively charged plate as if they carry positive charge. Hence silicon and germanium doped with electron deficient impurities are called p-type semiconductors.

Question 10.
Non- stoichiometrice cuprous oxide, Cu2O can be prepared in the laboratory. In this oxide, copper to oxygen ratio is slightly less than 2:1. Can you account for the fact that this substance is p-type semiconductor.
Answer:
The ratio is less than 2:1 in Cu2O shows that some cuprous( Cu+) ions have been replaced by cupric (Cu2+) ions. To maintain electrical neutrality, every two Cu+ ions will be replaced by one Cu2+ ion thereby creating a’ hole. As conduction will be due to presence of these positive hole, hence it is a p-type semiconductor.

Question 12.
Explain the following terms with suitable examples :
(i) Schottky defect
(ii) Frenkel defect.
(iii) Interstitial defect
(iv) F-centers
Answer:
(i) Schottky defect:
If in an ionic crystal of the type A+ B– equal number of cations and anions are missing from their lattice sites so that the electrical neutrality is maintained, then it is called Schottky defect. The Schottky defect containing one pair of holes due to missing of one cation and one anion. This type of defect is shown by highly ionic compounds which have high coordination number and small difference in the size of cations and anions.
Examples: NaCl, KCI, CsCl, AgBr etc. 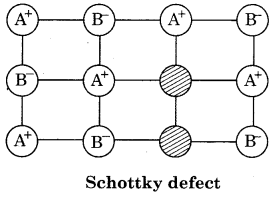 (ii) Frenkel defect:
If an ion is missing from its lattice site (causing a vacancy or a hole there) and it occupies the interstitial site, electrical neutrality as well as the stoichiometry of the compound are maintained then it is called Frenkel defect. It is also called dislocation defect because smaller ion is delocated from its normal site to an intestial site. Example: ZnS, AgBr and AgI etc. 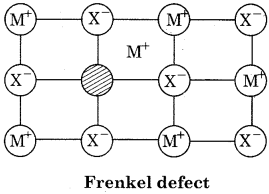 (iii) Interstitial Defect:
In this case, the extra anions may be occupying interstitial positions, The extra negative charge is balanced by the extra charges (oxidation of equal number of cations to higher oxidation states) on the adjacent metal ions. Such type of defect is not common because the negative ions are usually very large and they can not easily fit into the interstitial sites.

(iv) F-centre:
When a negative ion may be missing from its lattice site, leaving behind a hole which is occupied by an electron, to maintain electrical neutrallity. The site containing electrons thus trapped in the anion vacancies are called F-centers because they are responsible for imparting colour to crystal. (F= Farbe which is a German word for “colour’).
Examples :
Yellow colour of NaCl, pink colour of Lici, purple colour of KCl etc.

(iii) Ferrimagnetism:
Substances which are expected to possess large magnetism on the basis of the magnetic moments of the domains but actually have small net magnetic moment are called ferromagnetic substances e.g. magnetite (Fe3O4).