RBSE Solutions For Class 12 Chemistry Chapter 10 Question 1.
Out of the following compounds which compound will give Haloform reaction?
(a) Methanol
(b) Ethanol
(c) 1 – Propanol
(d) Butanol

RBSE Solution Class 12 Chemistry Question 7.
Out of the following which compound has zero dipole moment?
(a) CH3Cl
(b) CHCl3
(c) CCl4
(d) CHI3

RBSE Solutions Class 12 Chemistry Question 3.
Write the name and formula of anyone alcohol and one ketone which give haloform reaction:
Answer: 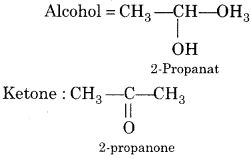 RBSE Solutions Chemistry Class 12 Question 4.
Which reagent is used for the formation of methanol from methyl chloride?
Answer:
Methanol can be prepared by hydrolysis of methyl chloride with aqueous KOH solution.

Write the IUPAC name of
Answer: 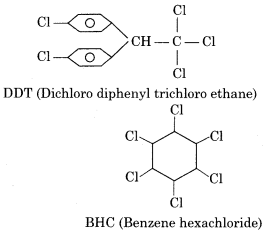 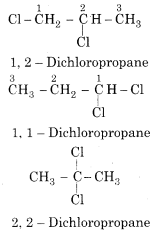 Question 11.
Write formula and uses of chloropicrin and chlorine.
Answer:
(i)

Uses:
Chloropicrin was manufactured for use as a poison gas in world war. In agriculture, chloropicrin is injected into the soil prior to planting a crop in order to fumigate soil.
(ii)

Uses:
It acts as a hypnotic and nervous sedative.

Question 13.
Which gas is formed when chloroform is exposed to air?
Answer:
Poisonous gas phosgene is formed.

Question 14.
Which one is more reactive from methyl chloride and methyl iodide?
Answer:
CH3 – I will be more reactive than CH3 – Cl because I– ion is a better leaving group than Cl– ion. Alternatively, bond dissociation enthalpy of C – I bond is less than that of the C – Cl bond.

Question 15.
Write the structure of C5H12 which forms only one mono chloro derivative.
Answer:
It must be of symmetrical nature and is neopentane (CH3)4C.

Question 16.
What is the use of DDT?
Answer:
It is used as an insecticide for killing or controlling mosquitoes, lice etc.

Question 18.
Arrange the following in order of reactivity towards SN1 reaction.
Answer:

Question 1.
C6H5Cl is less reactive towards nucleophilic substitution reactions than C2H5Cl. Explain.
Answer:
In chloroethane, the C-atom of C – Cl bond is sp3 hybridised while in C6H5Cl, the carbon atom is in sp2 hybridisation state. The sp2 hybridised C – an atom with a greater s-character is more electronegative and can hold the electron pair of the C – Cl bond more tightly than sp3 – hybridised C-atom in chloroethane with less s-character. Thus the bond cleavage in chlorobenzene is more difficult and is, therefore, less reactive as compared to chloroethane.

Question 2.
How ethyl bromide is prepared from Grignard reagent?
Answer: Question 3.
Write the chemical reaction for the formation of BHC.
Answer:

(b) Diphenyl from chlorobenzene Question 5.
Explain β -elimination.
Answer:
When haloalkane or alkyl halide with a β – hydrogen atom is heated with alcoholic solution of potassium hydroxide (alc. KOH), the OH– ion acts as a base and eliminate an electron from β – carbon atom then this elimination is known as β – elimination. There is also a simultaneous elimination of halogen atom from a – carbon. As a result, an alkene is formed.

This reaction is also called dehydrohalogenation.

Question 6.
Write the mechanism of Carbyl amine reaction.
Answer:
Carbylamine Reaction or Isocyanide Reaction – When chloroform is heated with a primary amine and alcoholic KOH then isocyanide is formed with an extremely unpleasent smell which is also known as a carbyl amine. This reaction is used as a test for primary amine and chloroform, therefore, it is also known as isocyanide test. Question 7.
How will you prepare the following from chloroform:
(a) Acetylene
(b) CCl4
(c) Salicylaldehyde
Answer:
(a) Acetylene from Chloroform:
On warming with Ag powder, chloroform is converted into acetylene.

(b) CCl4 from Chloroform:
Chloroform on chlorination gives carbon tetrachloride.

(c) Salicylaldehyde from chloroform:
Chloroform and phenol are heated with alcoholic KOH to give salicylaldehyde.

Question 9.
How will you prepare the following from aniline?
(a) Chlorobenzene
(b) Bromobenzene
(c) Iodobenzene
Answer: Question 11.
What happens when:
(i) Does ethyl bromide react with silver cyanide?
(ii) Iodoform is heated with silver power?
Answer:

In chlorobenzene, ionisation leading to carbonation is not possible. Therefore it is less reactive.

(i) These may be classified as mono, di, tri, tetra etc compounds depending on the number of halogen atoms present in haloalkane. For example,

(ii) Monohaloalkanes are classified into three types on the basis of nature of carbon atom to which halogen is attached. ‘
Primary Alkyl Halides:
In these compounds, the halogen atom is attached with a primary carbon atom.
For example:

Secondary Alkyl Halides:
In these halogen atoms is attached with a secondary carbon atom.
For example:

Tertiary Alkyl Halide:
In these compounds, the halogen atom is attached with the tertiary carbon atom.

(iv) Benzylic Halides:
In these compounds, the halogen atom is bonded to an sp3 hybridised carbon atom next to an aromatic ring. This carbon is known as benzylic carbon.

(v) Vinylic Halides:
In these compounds, the halogen atom is bonded to the sp2 – hybridised C – atom of a carbon-carbon double bond.

(vi) Aryl Halides or Haloarenes:
In these compounds, halogen is bonded to the sp2 – hybridised carbon atom of an aromatic ring. (c) Directive Influence of Halogen atom in Haloarenes:
In haloarenes, the halogen atom present in the ring is ortho and para directing in nature and therefore in a substitution reaction, a mixture of isomeric products is formed, in which the para – isomer is the major product since the para position is less hindered in the molecule of haloarene compared to ortho position.
In haloarenes, the halogen atom has also a strong –I (inductive) effect which is likely to deactivate the ring and the electrophilic attack will become rather difficult. However, +M effect dominates over the –I effect when the electrophile is directed to ortho and para position in the ring. Therefore, the electrophilic substitution takes place at these positions though with difficulty. The electrophilic attack is not feasible at the meta position in the ring because the +M effect is rather weak and –I effect of the halogen atom is expressed to have greater magnitude.

(b) Alkyl halide from halogen exchange:
In this reaction, alkyl halides are prepared from alkyl halides only.
For Example:
R – Cl + Nal \(\xrightarrow [ Acetone ]{ \triangle } \) R – I + NaCl
R – Br + Nal \(\xrightarrow [ Acetone ]{ \triangle } \) R – I + NaBr
This reaction is known as the Finkelstein reaction. The synthesis of alkyl fluoride is best accomplished by heating alkyl iodide in the presence of a metallic fluoride such as AgF. This reaction is called “Swarts reaction”.
R – I + AgF \(\rightarrow \) R -F + Agl (even acetaldehyde) is reacted with halogen in aqueous sodium hydroxide, the ketone gets oxidised to the sodium salt of acid with one carbon less than ketone and at the same time haloform (CHX3) also gets formed.

When the reaction is carried with iodine, a yellow precipitate of iodoform is obtained.

(b) Carbylamine Reaction:
Chloroform is heated with primary aliphatic or aromatic amine and alcoholic KOH then it forms isocyanide or carbylamine with an extremely unpleasent smell. The reaction is not given by secondary and tertiary amines and is, therefore, a test for the primary amines.

(d) Sandmeyer Reaction:
In this reaction, benzene diazonium chloride is reacted with CuCl or CuBr in the presence of corresponding halogen acid to form haloarene. Question 4.
Explain the mechanism of SN1 and SN2
Answer:
Unimolecular Nucleophilic Substitution or SN1
(i) These reactions proceed in two steps:
(ii) In step I:
Heterolytic cleavage of C-X forms a carbocation (carbonium ion) (R⊕) in the form of intermediate and a halide ion X–. Step I is the slowest step, therefore, it is rate determining step.
R-X \(\xrightarrow [ slow ]{ step } \) R⊕ + X–
(iii) In the first step, only alkyl halide is used therefore the rate of reaction depends only upon the concentration of alkyl halide.
Rate α [ R-X ]
Therefore, this reaction is known as unimolecular nucleophilic substitution reaction (SN1).
(iv) In the second step, carbocation is attacked by nucleophile to form a product. Rate of the second step is much more than the first step.

Order of reactivity of SN1 mechanism if halogen atom is the same.

The intermediate carbocation is planar, therefore attack of the nucleophile may be accomplished from either side resulting in a mixture product. Therefore if the reactant is optical isomer then the product is a racemic mixture. Mechanism of SN1 reaction between tertiary butyl chloride and aqueous KOH can be explained in the following ways: The overall reaction can be represented as follows:

(b) Bimolecular Nucleophilic Substitution or SN2
(i) This type of reaction occurs in one step.
(ii) In this type of reaction the only formation of transition state occurs and no intermediate is formed.
(iii) For the formation of the transition state, the attacking nucleophile attacks from the opposite directions at from 180° angle of leaving the group (X®). This is known as backside attack or rear attack.
(iv) In the transition, state attacking nucleophile (Nu–) and leaving the group (X–) both are partially attacked with the central carbon atom.
(v) The rate of reaction depends upon the concentration of both the alkyl halide and the nucleophile. Therefore, these reactions are known as bimolecular nucleophilic substitution reaction (SN2).
Rate α [ R-X ] [ Nu– ]
(vi) In these reactions, the configuration of products is opposite to that reactants, therefore in these reactions inversion of configuration occurs. This is’ known as “Walden inversion”.
(vii) In these reactions, the presence of bulky alkyl group on the carbon of C-X bond produces steric hindrance for the attack of the nucleophile. Therefore with the increase in the number of alkyl groups on carbon, the reactivity of R-X decreases. If the halogen atom is same then the order of reactivity of alkyl halides towards SN2 mechanism is as: Question 5.
Write a short note on the following?
(i) Freons
(ii) DDT
(iii) BHC
Answer:
(i) Freons:
Chlorofluoro derivatives of methane and ethane are called freons. They can be prepared by the reaction of HF with carbon tetrachloride (CCl4) or hexachloroethane in the presence of SbCl5.
For example:

(ii) DDT (Dichlorodiphenyltrichloroethane)
It is synthesized by treating a mixture of chloral with chlorobenzene in the presence of concentrated H2S04. DDT is a white crystalline solid. It is used as an insecticide for killing or controlling mosquitoes, lice etc. DDT is a harmful poisonous substance and does not easily decompose.

(iii) B.H.C. (Benzene Hexachloride)
It has many common names like gammexane, lindane etc. Its IUPAC name is 1,2,3,4,5,6 – hexachlorocyclohexane. It is prepared by chlorination of benzene in the presence of UV radiations.

It is a mixture of many isomers (α, β, γ, δ, θ, η, ε, σ). BHC is used in an agricultural field in the form of insecticide. Insecticidal activity is highest in gamma-isomer (γ – BHQ), In comparison to other isomers, γ -isomer is comparatively small so its penetrating power is more. 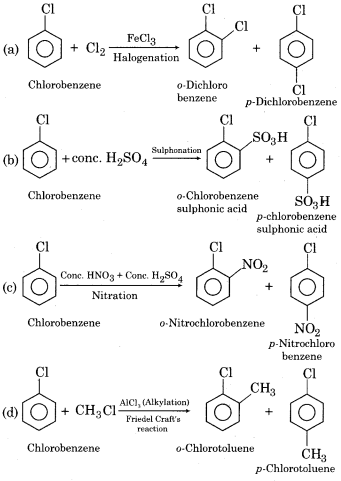 (ii) Alkyl halides react with an alcoholic solution of KCN to give alkyl cyanides.

(iii) When alkyl halide is treated with silver nitrate (AgNO2), nitroalkanes are obtained.

(iv) When an alkyl halide is treated with sodium or potassium nitrite, alkyl nitrite is obtained.

(v) When secondary alkyl halide (isopropyl chloride) is treated with benzene in the presence of anhydrous AlCl3 isopropylbenzene is obtained.

(vii) When alkyl halide (e.g. chloromethane) is heated with an alcoholic solution of ammonia in a sealed tube to about 373 K, a mixture of products containing primary, secondary, tertiary amines and quaternary ammonium salt is formed. This reaction is called Hoffmann ammonolysis reaction.