RBSE Solutions For Class 12 Physics Chapter 5 Question 1.
The product of resistivity and conductivity of conductor depends upon :
(a) the cross-sectional area
(b) the temperature
(c) the length
(d) none of these
Answer:
(d) none of these 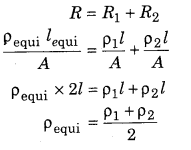 Physics Class 12 RBSE Solutions Question 3.
A conducting resistance is connected to the battery and temperature of conductor decreases by the process of cooling then the value of current will be :
(a) increased
(b) decreased
(c) remain constant
(d) zero
Answer:
(a) increased
The resistance of the conducting wire will decrease according to equation Rt = R0 (1 ± α Δt) due to which current will increase according to Ohm’s law (I = \(\frac{V}{R}\)) 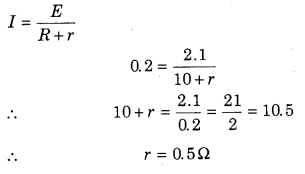 RBSE Solution Physics Class 12 Question 5.
The current I and voltage V curves for a given metallic conductor at two different temperatures T1 and T2 are shown in the figure then : 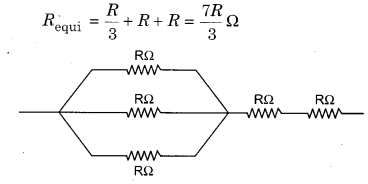 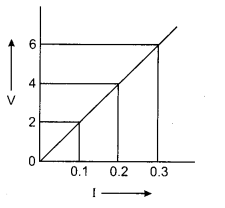 Question 7.
Find the value of current which is flowing through the bulb of 40 W 220 V.
Answer:

Question 2.
In the given material the resistivity of single metal are ρ1 and ρ2 (Ω × m), find the ratio of ρ1 and ρ2.
Answer:
Resistivity of a conductor does not depend on length and area of cross section of the material.
∴ ρ1 : ρ1 = 1 : 1 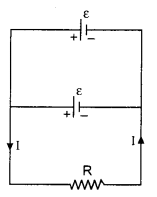 Question 4.
What is the difference between emf and terminal potential difference?
Answer:
See the article no. 5.10.
Electromotive Force (or e.m.f.) of a Cell
“The energy given by the cell to a unit charge for flowing through the circuit i.e., the work done in flowing the unit charge through the complete circuit by the cell is called the electromotive force or e.m.f. of the cell.”
It is represented by E. Therefore
E = \(\frac{W}{q}\) ……………. (1)
Where W is the work done by the cell in flowing charge q throughout the circuit.
∴ Unit of E = —\(\frac{\mathrm{J}}{\mathrm{C}}\) = JC-1 or volt.
If q = 1C, W = 1J, then E = 1JC-1
i. e., “If the work done in flowing unit charge is lJ then the e.m.f. of the cell is 1 JC-1 or 1 volt.”
The value of e.m.f. for one cell is constant and different for different cells. For example, e.m.f. of voltaic cell is 1.08 volt, for daniell cell it is 1.12 volt and for dry cell it is 1.5 volt.
Important Points
1. Although we call e.m.f. as force but actually it is energy which is given by the cell to unit charge for flowing through the circuit.
2. If external resistance is connected between the terminals of the cell the the potential difference between the terminals is ‘Terminal voltage’ of the cell.

3. When there is no external resistance connected between the terminals the potential difference is equal to the e.m.f. of the cell.

Terminal Potential Difference
“Work done by the cell in flowing a unit positive charge from one terminal to other terminal through external resistance in a circuit is called the terminal potential difference or terminal voltage of the cell.”
Therefore terminal voltage
V = \(\frac{W_{\mathrm{ext}}}{q}\) …………… (2)
Where Wext is the work done by the cell in flowing q charge through external circuit.
If R be external resistance in the circuit and i the flowing current, then
V = \(\frac{W_{\mathrm{ext}}}{q}\) = iR (according to Ohm’s law)
Similarly if r be the internal resistance of the cell, then the potential drop i.e., the energy consumed due to internal resistance r,
v = ir
According to definition of e.m.f.
E = Work done (external work + internal work) in flowing unit charge.

i.e., “in open circuit, the terminal potential difference of the cell is called the e.m.f. of the cell.”
From equation (4), Therefore, internal resistance of a cell can be obtained with the help of equations (5) and (6).

Question 5.
Write the definition of drift velocity.
Answer:
Drift Velocity (vd)
When a potential difference (V) is applied across the conductor of length (l), then an electric field \(\overrightarrow{(E)}\) develops in the conductor \(\left(E=\frac{V}{l}\right)\) Due to this field each free electron of the conductor experiences an electric force \(\vec{F}=-e \vec{E}\) towards the positive end of the conductor and hence it starts accelerated motion \(\left(\vec{a}=\frac{\vec{F}}{m}\right)\) towards the positive end. During its accelerated motion it collides with the other electrons and positive ions of the conductor. Therefore its velocity always remains changing. This motion of electron is known as ‘Drift motion’ and the average velocity between two successive collisions is known as ‘Drift velocity.’ It is denoted by vd.

“i.e., the maximum velocity achieved by the electrons due to imposed electric field with which they collide with other ions, is known as drift velocity.” Time taken in two successive collisions is called ‘Relaxation time’. For most of the conductors, the relaxation time is the order of 10-14s. Just before colliding with a ion, the velocity is maximum and after collision for a moment the velocity becomes zero. Again electron gets accelerated by applied electric field and repeats the previous situation of colliding with ions of the conductor. Thus “the potential difference of battery does not provide accelerated motion to electrons but it can provide a small constant velocity along the length of the conductor, which is imposed upon the random motion of the electrons. This constant velocity of the electron is called drift velocity of electrons.” The order of this drift velocity about 10-4 m/s. Relaxation time (τ) : The average time taken by electron in two successive collisions is known as ‘Relaxation time’ and it is denoted by τ. It is obtained by

Question 6.
When a wire of 80 resistance is bent in the form of a circle then find out the resistance between any two ends of the diameter.
Answer:
When resistor is folded into the circular form, then across diameter, for equivalent resistance, shape is divided in two parts, therefore resistance becomes half. Question 8.
Can the potential difference between the plates of a cell more than its electromotive force (emf)?
Answer:
Yes, when the cell is in condition of charging.
VT = E + Ir

Question 1.
What is called drift velocity? Obtain the equation of Ohm’s law (\(\vec{J}=\sigma \vec{E}\)) on the basis of drift velocity where parameters are in their usual meaning.
Answer:
When a potential difference (V) is applied across the conductor of length (l), then an electric field \(\overrightarrow{(E)}\) develops in the conductor \(\left(E=\frac{V}{l}\right)\) Due to this field each free electron of the conductor experiences an electric force [latex]\vec{F}=-e \vec{E}[/latex] towards the positive end of the conductor and hence it starts accelerated motion \(\left(\vec{a}=\frac{\vec{F}}{m}\right)\) towards the positive end. During its accelerated motion it collides with the other electrons and positive ions of the conductor. Therefore its velocity always remains changing. This motion of electron is known as ‘Drift motion’ and the average velocity between two successive collisions is known as ‘Drift velocity.’ It is denoted by vd.

or V = ρ \(\frac{l}{A}\) i ………….. (4)
Here \(\frac{m}{n e^{2} \tau}\) which is characteristic of the substance of the conductor and it is called ‘specific resistance’ or ‘resistivity’ of the substance. It is constant for one substance and different for different substances. Equation (7) is called microscopic form of Ohm’s law.
Specific Resistance. “Ratio of intensity of electric field (E) and current density (J) at any point inside the current carrying conductor, is called the specific resistance of the material of the conductor. It is represented by ρ.”
∴ ρ = \(\frac{E}{J}\)
If the length of the conductor be l and potential difference across it be V, then
E = \(\frac{V}{l}\) and j = \(\frac{i}{A}\)
Where A is the area of cross-section of the conductor

Specific resistance can also be obtained by following formula,
ρ = \(\frac{m}{n e^{2} \tau}\) …………….. (9)
Where m is the mass of electron, n is the free electron density, e is the electronic charge and τ is the relaxation time.

Question 2.
Establish the relation between drift velocity and electric field. What is mobility? Describe the relation between mobility and velocity.
Answer:
Relation between Drift Velocity and Potential Difference
Suppose PQ is a conductor of length l and a potential difference V is applied across PQ as shown in the figure 5.5. i.e., its P end remains negative and Q end positive. Therefore an electric field is developed directing from Q to P and its intensity is given by
E = \(\frac{V}{l}\) …………. (1)
Each free electron of the conductor experiences a force (\(\vec{F}\)) towards the end Q,
∴ \(\vec{F}=-e \vec{E}\) If m be the mass of the electron, then its acceleration

∵ The average thermal velocity of electrons is zero.
∴ u = 0
Therefore using first equation of motion (v = u + αt), we have This is the relation between drift velocity and potential difference.

So the mobility of ions are defined as the ratio of drift velocity to the electric field.
Mobility is positive and its unit is \(\frac{\mathrm{m} / \mathrm{s}}{\mathrm{volt} / \mathrm{m}}\) = m2s-1volt-1
When electric field is same for given metals
\(\frac{\mu_{1}}{\mu_{2}}=\frac{v_{d_{1}}}{v_{d_{2}}}\)
It means when in any metal drift speed is more than electrons, then its mobility will also high. We will discuss about mobility related to semiconductor in Chapter 16.
Relation between electric current and mobility for semiconductor : Conductivity in semiconductors is due to electrons and holes both. As shown in figure 5.20, suppose two cells of emf’s ε1 and ε2 and internal resistances r1 and r2 are connected in parallel between two points A and B. If equivalent e.m.f. is εeq and equivalent internal resistance is req of combination then terminal potential difference will be
V = εeq – Ireq …………… (5)
Comparing equation (4) and (5),

Similarly if n cells are combined in parallel system then, Question 2.
Find out the equivalent resistance between a and b as shown in figure. Question 3.
Find out the equivalent resistance between a and b of the circuit in which infinite resistances are connected.

Solution:
Let except first two resistances the equivalent resistance of all be x. Adding DG and EF resistance in parallel. Question 9.
E.m.f. of accumulator battery of car is 12 V and its internal resistance is 0.4 Ω, then find out the maximum current drawn from the battery.
Solution:
Electromotive force (E) = 12 V
Internal resistance (r) = 0.4 Ω

Question 11.
The length of a cylindrical tube is / and its internal and external radius are a and b respectively. If resistivity of matter is ρ then find out the resistance between the ends of the tube.
Solution:
Resistance of cylinder, R = ρ\(\frac{l}{A}\)
Area of cross section for flow of current = External area – Internal area Energy consumed by 2 fans of 60 watt each