Question 2.
Fill in the blanks

Question 3.
Match Column A with column B

Question 1.
What is refraction? What is the cause of refraction?
Answer:
When a light ray enters from one medium to another medium, then it deviates from its path. This phenomenon is called refraction of light.
Cause of Refraction: The speed of light in denser medium (glass) is less than rarer medium (air). Hence it is clear that when light enters in the denser medium from rarer medium its speed becomes slow, on the other hand when it enters from denser to the rarer medium, it’s speed increases. Hence phenomenon of refraction takes place due to difference in speed of travelling from one medium to another.

Question 2.
Write the main difference between convex and concave lens.
Answer:
A lens which is thick in middle portion and thin at the edges, is called convex lens. This lens converts all the beams of parallel rays of light into a single point, hence it is called a convex lens. The beams of light rays coming parallel to the axis refract from a convex lens and the point where they all are converge is called focal point of the lens, A lens which is thick at the edges and thin in middle portion is called a concave lens. This lens diverge the light beam coming parallel to the axis. Hence it is called concave lens. Light rays passing through lens deviate from their path, hence we can say that lens refract the light rays,

Question 3.
Define the refraction coefficient.
Answer:
Refraction Coefficient is the proportion of speed of light in two mediums. It is constant and dimensionless quantity.

Question 4.
What do you mean by dispersion? Write the sequence of colours in rainbow.
Answer:
The phenomenon due to which all the seven colours of white light separate and form a band of seven colours is called dispersion of light. This occurs because speed of all colours are different in glass prism. Hence when white beam of light enters the prism, it splits into its original colours violet, indigo, blue, green, yellow, orange and red colour. This is called dispersion of light.

Question 5.
The two classmates of Meena are Raghav and Megha, Raghav is not able to see distant objects and Megha is not able to see near objects. What are eye’s defects they have? To remove these defects which type of lens they should use in their spectacles?
Answer:
Raghav is suffering from far sightedness or hypermetropia. It is corrected by using convex lens. Megha is suffering from shortsightedness or myopia. It is corrected by using concave lens.

Question 1.
Explain the refraction of light rays from glass slab with a pictorial diagram.
Answer:
Fix a white paper sheet on a drawing board with the help of drawing pins. On paper keep a rectangular glass slab in centre. Draw7 sketch of a slab with pencil name this figure as PQRS. Remove slab and draw a normal at MON point O, MON also make an angle of incidence AO (30°) wdth the help of a protector and draw a line AB, on this line at point A and B, stick two pins vertically. Now put again glass slab on the same sketch on opposite side. Look the images of pins and point A and B. Rat a pin at point C in such a way that point C and images of point A and B should be in a straight line. Take one more pin and put in such a way that Point A,B,C and D look in a straight line, remove pins and slab. 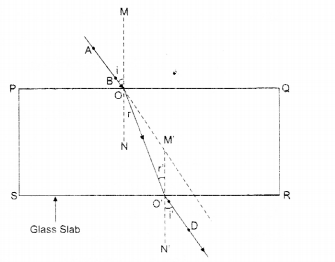 Where pins C & D were put. Encircle them and draw a line between them join it width O’. Draw normal O’N’ at point O’ on the surface SR. Now, join O with O’ and extend AB also we see that line in the direction of A, B blow’s into the air and light ray strikes the surface of the slab and enters it. On point O it bends towards normal, while enters from a rarer medium to denser medium, (i.e. air to glass). In the same manner when it travels from denser to the rarer medium {i.e. glass to air) on surface SR point O’ it goes away from the normal.
So we can say that:

Question 2.
Name the optical instruments which use lens. Describe it in brief.
Answer:
In correction of defects of vision-In spectacles both types of lenses are used. Those who cannot see things at distance clearly, they suffer from defect of near sightedness. Such people use concave lenses. Those who cannot see things nearby, they suffer from defect of far sightedness. They use convex lens. Simple microscope – Clock repairers use a convex lens to see the very small parts of clock. This single convex lens is called simple microscope. In this microscope the low focal length lens is used. By this small things can be magnified. Compound microscope – In this microscope two convex lenses are fitted in a metal tube. Lens is located on the side where object is kept, is called objective lens while lens which is kept near eye is called eye piece. Telescope – It is used to see things at very far distance. It also contains two convex lenses. They are also called objective lens and eye piece.

Question 3.
Explain in brief the working and structure by human eye.
Answer:
In our eyes there is convex lens located which is formed by flexible muscles. Due to this lens, image of object formed at retina, and we can see things. Our eyes are round in shape, the outermost conversing of eye is white in front of it, transparent part cornea is situated, behind cornea dark coloured structure made of muscles is located, it is called iris. There is a small hole in iris called Pupil. Its size is controlled by the iris. In the case of more light the aperture of pupil reduces and in low light it increases. At the back of the pupil is eye lens which is located at its place with the help of muscles. The part between cornea and lens is filled with transparent fluid which is called eye fluid or Aqueous humour. 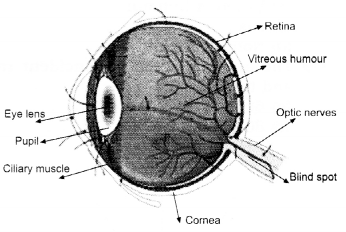 Through lens inverted image is formed on retina. Retina is a light absorber transparent membrane which has many light sensitive nerves, these are connected to brain. When these nerves send the message of the formation of image on retina to the brain, then brain converts inverted image into erect image and we see the object. The transparent fluid fill between lens and retina is called vitreous humour or fluid.

Question 1 .
The process of bending light into seven colours is called
(a) Deflection
(b) Dispersion
(c) Spectrum
(d) Normal

Question 2.
The amount of light entering the eye is controlled by
(a) Iris
(b) Ciliary muscle
(c) Cornea
(d) Eye lens

Question 4.
At what position of the object does a convex lens act as a magnifying glass?
(a) between F and 2F
(b) between F and O
(c) Beyond F
(d) Beyond 2F

Question 5.
The image which cannot be obtained on screen is called
(a) Erect
(b) Real
(c) Virtual
(d) Inverted

Question 6.
We are able to see objects around us because
(a) The objects absorb all the light
(b) The light can be reflected
(c) Light travels in straight line
(d) The light reflected from the object enters our eyes.

Question 7.
In whose memory National Science Day is celebrated
(a) Dr.CV Raman
(b) Dr.Chandra Shekhar Bose
(c) Dr.Homi Jahangir Bhabha
(d) None of these

Question 8.
The liquid filled between the retina and the lens is called
(a) Eye fluid
(b) Vitreous humour
(c) Iris
(d) None of these 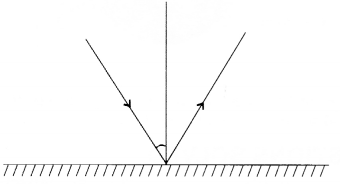 Question 10.
When a ray of light passes through the second optical medium with a change in the angle, the phenomenon is known as
(a) Reflection of light
(b) Absorption of light
(c) Refraction of light
(d) None of these

Question 11 .
The band of seven colours that constitute white light is known as
(a) Rainbow
(b) Palette
(c) Spectrum
(d) None of these

Question 13.
Which of the following is used as a side view mirror?
(a) Plane mirror
(b) Convex mirror
(c) Concave mirror
(d) None of these

Question 15.
When object lies at 2f in front of a convex lens, its image distance from the lens is at
(a) f
(b) Infinity
(c) Between 2f and infinity
(d) 2f

II . Write true or false in front i of the statements given below:

III. Match Column A and B

Question 1.
What is light?
Answer:
Light is a source of energy which enable us to see through our eyes.

Question 2.
What is dispersion?
Answer:
The phenomenon due to which white light splits into seven colors (VIBGYOR) when passed through an equilateral prism is called dispersion.

Question 4.
What is Hypermetropia? How is hypermetropia corrected?
Answer:
People who cannot see nearby object very clearly but can see far objects clearly and is said to have a defect called hypermetropia. This defect is corrected by wearing spectacles made of convex lenses.

Question 5.
What is lens? How many types of lens are there?
Answer:
The transparent medium covered by the two curved surfaces is called lens. There are mainly two types of lens:

Question 6.
Why is convex lens called converging lens?
Answer:
When the rays of light coming parallel to principle axis after refraction through the lens passes through a point called focus, since it converge all the ray at one point, that is why it is said to be converging lens.

Question 10.
What is blind spot?
Answer:
The point where the optic nerve enters the eye has which no nerve endings. It is insensitive to light and is called blind spot.

Question 12.
What is the cause of refraction?
Answer:
The refraction of light is due to the change in the speed of light on going from one medium to another.

Question 1.
Draw a ray diagram, for the image formation of an object when it is placed at

Question 3.
Write a short note on Dr. C.V. Raman.
Answer:
He was an Indian Physicist. He was honoured with prestigious Nobel Price in Physics in 1930 for his excellent work on scattering of light. The discovery made by him on scattering of light is known as Raman effect. He was awarded the Bharat Ratna in 1954 and Lenin peace Prize in 1957. In his memory National Science Day is celebrated every year in India. 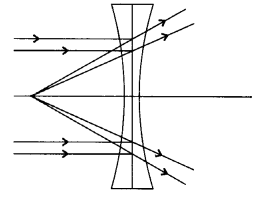