Question 2.
Fill in the blanks:

Question 3.
Match the column 1 with column 2

Question 1.
What is malleability?
Answer:
Metals are spread on beating by the force of a hammer. They are converted into sheets. This property is known as malleability.

Question 2.
What are mixed metals?
Answer:
When some amount of metal or non metal is mixed with main metal, then it is called mixed metal or alloy, for examples – in stainless steel chromium and nickel is mixed to protect it from rusting. In brass, zinc and copper are mixed in a fixed quantity to get desired properties such proportionate mixture is called an alloy such as bronze, brass and stainless steel.

Question 4.
Why is graphite a good conductor of electricity?
Answer:
Graphite is a good conductor of electricity because in graphite, carbon atom is combined with three nearest carbon atoms on the same surface and forms a hexagonal structure. While one end of them is free, such surfaces form weak bonds hence it is used in dry cells and electric arc.

Question 1.
Why sodium metal is kept in kerosene?
Answer:
Sodium is highly reactive. It reacts with water and oxygen quickly and forms sodium hydroxide and hydrogen gas hence catches fire. To disconnect its contact with air it is kept in kerosene. When a very small pieces of (Na) sodium is dried in a filter paper and then put into a beaker filled with water. It seems that piece of (Na) moves fast as it forms sodium hydroxide and hydrogen reacting with water.

Question 2.
Differentiate between metals and non-metals on the basis of their physical properties.
Answer:
Physical properties of metal:
(a) State: Most of the metals are found in solid state at normal temperature except mercury (Hg) which is found in liquid state at normal temperature.
(b) Colour: Mostly metals are grey in colour.
(c) Lustre: Most of the metals are lustrous. They are capable of reflecting rays of light from their upper surface therefore, they are lustrous such as gold, silver, copper, aluminium.
(d) Hardness: Most of the metals are hard. Hardness of different metals are different. Sodium and potassium are less hard compared to other metals.
(e) Sonorous: When metals are struck with other hard metals or objects then a special sound is produced, this property is called sonorous. Due to this property of metals they are used to manufacture bell and music instrument etc.
(f) Density: Generally metals have high density. Things made of metals are heavy so when they put in water they sink while those have less density will float in water such as sodium (Na) and potassium (K) etc.
(g) Melting Point: That temperature at which solid changes into liquid state is called melting point of that object. Due to hardness of solid their melting point is high such as iron (Fe). The melting point of iron is 1593°C while galium is exception it melts just by putting it on hand palm as its melting point is very low.
(h) Heat conductivity: When a rod of steel is heated, after sometimes it becomes hot while a wooden rod when submerged in hot water does not get heated. Silver (Ag) is the best conductor while lead (Pb) is the least conductor. This is the reason that cooking utensils are made of metals and their handles are made of non-conductors like wood, plastic etc.

Question 3.
Write any four uses of metals.
Answer:
Use of metals:

Question 4.
Why copper wire is use for wiring at our houses? Explain.
Answer:
Copper is very good conductor of electricity. Electricity flows through it very easily. It conducts electricity evenly in all circuits of house wiring, so copper is used for electrical wiring in houses.

Question 5.
Write differences in metals and non – metals on the basis of their chemical properties?
Answer:
Chemical properties of metals – Metals react with air, water, acid and form many chemical substances.
(a) Reaction with air:
Metals form their oxides when react with oxygen present in air. Metals + Oxygen → Metal oxides When ribbon of magnesium (Mg) is bum, it converts into white ash. When this ash is dissolved in a test tube with water and tested with a red litmus paper, it converts and turns into blue. Hence, it is proved that this solution (oxide) is alkaline in nature. In the same way copper and aluminium make their oxides due to which utensils of metals look dirty and non lustrous.
(b) Reaction with water:
They form metal hydroxide and release hydrogen. Sodium (Na)+ Water (H2O) → Sodium hydroxide (NaOH) + Hydrogen (H2)
When a very small piece of (Na) sodium is dried in a filter paper and then put into a beaker filled with water. It seems that piece of (Na) moves fast as it forms sodium hydroxide and hydrogen reacting with water. As (Na) is very reactive hence it is kept dip in kerosene, if it is kept open it bums with oxygen and reacts with water.
(c) Reaction with acid:
They produce hydrogen gas while reacting with acid.

Chemical properties of non- metals:
(a) Reaction with air: Non metals form their oxides when react with air (Oxygen). These oxide are acidic in nature. Take some powder of sulphur in a metal lid of a bottle and heat it. Wind this metal lid with a metal wire as the sulphur burn took into a gas jar cover it by a lid so the gas not to be let out. Now pour some water into a gas jar and shake it well, test the solution with blue litmus paper, it turns red. It proves that the solution is acidic. Sulphur (S) + Oxygen (O2) → Sulphur dioxide (SO2) Sulphur
powder reacts with oxygen which is an acidic oxide of non-metal.
(b) Reation with water: Generally non-metal do not react with water or steam, hence phosphorous are kept in water.
(c) Reaction with acids: Most of the non-metals do not react with dilute acids but sulphur react with concentrated nitric acid and form sulphur – dioxide, nitrogen oxide and water.

Question 1.
The most abundant metal in the earth’s crust is:
(a) Oxygen
(b) Calcium
(c) Aluminium
(d) Gold

Question 2.
The gas that burns with pop sound is:
(a) Nitrogen
(b) Hydrogen
(c) Oxygen
(d) Argon

Question 3.
Which metals burn in air at high temperature with the evolution of much heat?
(a) Cu
(b) Hg
(c) Pb
(d) A1

Question 5.
Iron is galvanised by coating it with
(a) Chromium
(b) Sodium
(c) Magnesium
(d) Zinc

Question 6.
Metals react with oxygen to form their oxides which are generally
(a) Neutral in nature
(b) Basic in nature
(c) Acidic in nature
(d) None of these

Question 7.
A mineral from which a metal can be extracted on the commercial scale, economically is called
(a) Metal
(b) Metalloid
(c) Corrosion
(d) Ore

Question 8.
Some elements neither fit with the metals nor with non metals are called:
(a) Mixture
(b) Compounds
(c) Metalloids
(d) None of these

Question 9.
After the reaction of non-metals with water-
(a) Hydrogen gas formed
(b) Carbon dioxide gas is formed
(c) Non-metal oxides are formed
(d) Non-metals are unable to react with water

Question 11.
Metal which does not react even with steam:
(a) Potassium
(b) Iron
(c) Silver
(d) Magnesium

Question 12.
Mercury is used in thermometer because:
(a) it does not wet the glass
(b) it is a liquid
(c) it expands on heating
(d) all of these

Question 13.
Substance conduct heat and electricity because of the property of:
(a) Ductivity
(b) Conductivity
(c) Malleability
(d) Tensile strength

Question 14.
Which one of the following metal is the most ductile?
(a) Aluminium
(b) Silver
(c) Gold
(d) Copper

Question 1.
What is the nature of metal oxide?
Answer:
Basic.

Question 3.
Define conductivity.
Answer:
Metals allow the electricity to pass through them. This property of metals is called conductivity.

Question 5.
Which is more metallic, sodium or aluminium?
Answer:
Sodium because it occupies higher position of the activity series.

Question 1.
What is galvanisation?
Answer:
A process employed to deposit a thin layer of zinc on the surface of iron objects to prevent them from rusting.

Question 3.
Why do silver jewellery becomes black after sometime, whereas silver does not react easily with oxygen?
Answer:
Silver does not react with oxygen but it reacts with sulphur particles present in the air and thus forms a black layer of silver sulphide, hence silver jewellery becomes black after sometime.

Question 4.
Why do we store phosphorus in water?
Answer:
Phosphorus is very reactive non metal. It catches fire if exposed in air so to prevent the contact of phosphorus with the atmospheric oxygen it is stored in water.

Question 5.
Write the equation of

Question 2.
Show the reaction of sodium with water experimentally .

Answer:
Experiment:
Take a beaker and half fill it with water. Take a piece of sodium and cut a small wheat grain size piece from it. Press it first in a filter paper and then wrap it in cotton. Next, drop the piece in beaker. You will observe a violent reaction. Wait till the reaction stops completely. Now touch the beaker. Is it hot? Test the substafi.ee in the beaker with red and blue litmus paper. You will see that the solution is basic due to the formation of sodium hydroxide. Sodium reacts violently with cold water.

Question 4.
How do you observe conduction of electricity in metals?
Answer:
Set up the circuit as shown with two free ends A and B. Check your circuit by switching on the current and touching A and B together.
Bulb should glow. Attach the wires/ fibres/thread one at a time to the ends A and B. Observe whether bulb glows or not. Tabulate your observations. 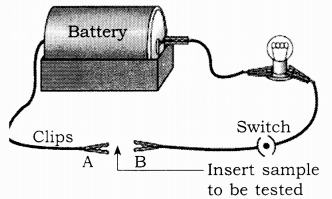 Observation: You will notice that the bulb glows in all the metallic wires tested. It shows that almost all of the metals are the good conductor of electricity.