Question 2.
The necessary force required to circulate a body in circular motion is:
(A) gravitational force
(B) frictional force
(C) centripetal force
(D) none of the above
Answer: C

Question 3.
Universal gravitational constant, G depends:
(A) on the nature of the particle
(B) on the medium present between the particles
(C) on time
(D) does not depend on any of these factors.
Answer: D

Question 6.
we double the distance between two masses, the gravitational force between the masses:
(A) remains unchanged
(B) becomes one fourth
(C) becomes half
(D) becomes twice
Answer: C

Question 9.
What changes will arise in force of gravitation between the masses, if the distance between them is doubled?
When d is doubled, the gravitational force will become one fourth.

Question 12.
Name the principle on which ball pen works.
Answer
It works because of the force of gravity. It works on the principle of Universal Law of Gravitation.

Question 16.
What is the cause of ocean tides?
Answer
The earth and the moon pull each, other due to the gravitational force of attraction. Water on the earth (ocean) is attracted by both the earth and the moon. The molecules in water are not rigidly fixed. Therefore, when the moon and the sun both lie on the same side of the earth (new moon) or on the opposite side of the earth (full moon) with the ocean, the combined gravitational pull causes a bulge in the ocean water. This bulging out of the ocean water in the direction of the moon is called tide.

Question 18.
At which place on the surface of the earth, the acceleration due to gravity is more and why?
Answer
The value of g varies from point to point in the universe, according to the values of M and r. Since the earth is flattened at poles and V reduces. Now since
\(g\alpha \cfrac { 1 }{ { r }^{ 2 } } \).
Therefore, the value of g is more at poles of the earth than the equator.

Question 21.
What are the differences between the mass of an object and its weight?
Answer

Question 22.
What do you mean by free fall? Give examples.
Answer
Whenever objects fall towards the earth only under the gravitational force of the earth (with no other forces acting on it) then we say that the objects are in the state of free fall.
Example: An object dropped from a height like a stone on the ground.

Question 27.
What problems occur for astronaut during weightlessness?
Answer
(a) In weightlessness state, the major problem faced by astronauts in the spacecraft is eating, drinking water, etc. It occurs because these eatable materials do not stick with plate properly and glass water does not pour.
(b) The space flight for a long time adversely affects the astronauts.
(c) Inside the aircraft, all the objects are in a floating position.

Question 28.
Before Kepler and Newton, name some ancient astrologers. Also, write their achievement in the gravitational field.
Answer
(a) In the fifth century, Indian astrologer Aryabhatta gave the geocentric model to understand the motion of the planet.
(b) After Aryabhatta, Bhashkaracharya gave his theory about gravity and planetary motion in his book ‘SIDDHARTH SHIROMANI’. Bhaskaracharya estimated the radius of the earth and its circumference.

Hence, the acceleration due to gravity becomes half of its original value

Question 4.
Two bodies of different masses are falling freely near the surface of the earth. They:
(A) have the same velocity at any instant
(B) move with different accelerations.
(C) experience forces of the same magnitude
(D) undergo a change in their inertia.
Answer: A

Question 5.
The law of gravitation is true for:
(A) the earth and any object only
(B) earth and the sun only
(C) any two massive bodies
(D) two charged bodies only
Answer: C

Question 7.
The gravitational force of attraction between two objects placed at distance R is proportional to:
(A) R
(B) R2
(C) 1/R
(D) 1/R2
Answer: D

Question 8.
If the distance between two objects is doubled, the gravitational force between them:
(A) remains unchanged
(B) becomes half
(C) becomes one-fourth
(D) becomes double
Answer: C 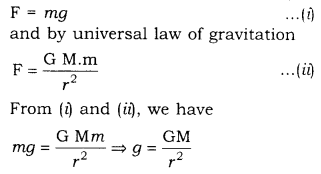 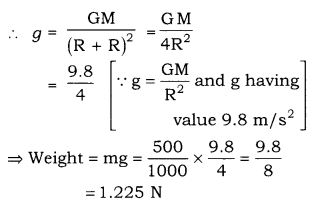 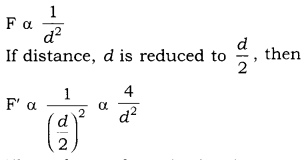 Thus, the force of gravitation increases by 4 times.

Question 8.
If the moon attracts the earth, why does the earth not move towards the moon?
Answer
The force exerted by the earth and the moon on each other is insufficient to move the earth, on account of its huge mass.

Question 10.
A ball thrown upwards reaches a certain height and then falls back to the earth. Why?          ,
Answer
The ball thrown upwards from the earth goes up against the force of gravity. So, its velocity goes on decreasing at the rate of 9.8 m/s2. It becomes zero at a certain height. So, the ball stops there for a moment and then, begins to fall back to the earth due to the force of gravity, as any object dropped from that height. 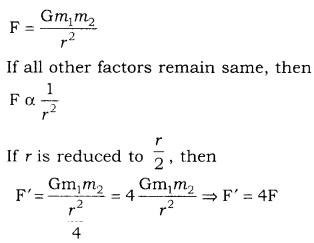 Thus, the force of gravitation increases by 4 times. 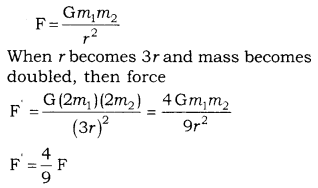 Question 1.
(a) State Newton’s law of gravitation. Obtain an expression for the gravitational force between two mass bodies.
(b) What is the value of G? Also, write its S.I. unit.
Answer
(a) According to this law, the force of gravitation acting between two bodies is directly proportional to the product of their masses and inversely proportional to the square of the distance between them. The direction of the force is along, the line joining the two masses.

where G is proportionality constant, called universal gravitational constant.
(b) Value of G is 6.67 X 10_11 N-m2/kg2

On putting values of mE and RE, the value of g at the surface of earth obtained is g = 9.8 m/sec.
(b) Let the mass of earth = m, Radius of earth = Rm
mass of the Moon = Rm
A radius of Moon = Rm
If acceleration due to earth is g and due to the moon is gm then 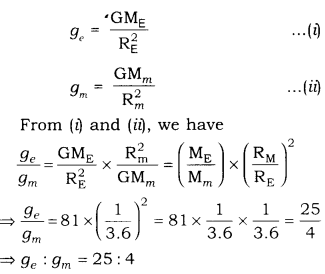