Question 3.
The chemical bond present in sodium chloride is:
(A) Ionic
(B) covalent
(C) Metallic
(D) Hydrogen
Answer: A

Question 6.
The inventor of the modem system of symbol for the elements is:
(A) Berzelius
(B) John Dalton
(C) Rutherford
(D) Neils Bohr
Answer: A

Question 9.
What are the radicals?
Answer
Radicals: A radical is an atom or group of atoms of the same or different elements carrying either positive or negative charge, which behaves as one unit in a chemical reaction.
The positively charged ions are called basic radicals, e.g. sodium Nay Ammonium NH4 .The negatively charged ions are called acid radicals e.g., Nitrate NO3 Oxide, O2; carbonate, CO3 2.

Question 15.
What is an anion?
Answer
When an atom receives electrons, it carries a negative charge. It is called an anion. Energy is released in the formation of the anion.

Question 16.
Define valency. Give its one example.
Answer
Valency: Valency is defined as the number of hydrogen atoms which combine directly or indirectly with one atom of an element.
Example: One atom of nitrogen combines with three atoms of hydrogen to form ammonia gas. So, the valency of nitrogen is 3.

Question 17.
Why is cation smaller than its corresponding atom?
Answer
Atoms of the metals form cations after losing one or more electrons. When a neutral metal atom will lose electrons, the number of electrons will be less than the protons. As a result, forces of attraction will increase between the positively charged nucleus and electrons and the cloud of electrons will contract. This results in the smaller size of cation than the corresponding atom. Also, when the cation is formed by losim electrons of the outermost shell, it has one shell less than the atom and so its size is smaller.

Question 18.
What is variable valency? Explain with an example,
Answer
Some elements possess more than one valence. Such elements are said to possess variable valency. For example, iron has two electrons in its outermost shell (valence shell). On donating these electrons, its valency becomes 2. However, under specific experimental conditions, it can lose another electron from the shell next to valence shell. In such a case, the ion formed has 3 electropositive valencies. In short, iron exhibits two valencies 2 and 3. The Latin name of iron is Ferrum. For lower valency, it is written as Ferrous and the symbol is Fe2+. For higher valency, it is written as Ferric and the symbol is Fe3+.

Question 19.
What is a co-ordinate bond? Explain with an example.
Answer

Co-ordinate bond is that covalent bond which is formed by two atoms sharing a pair of electrons in which both electrons come from the same atom. It is also called a dative covalent bond. 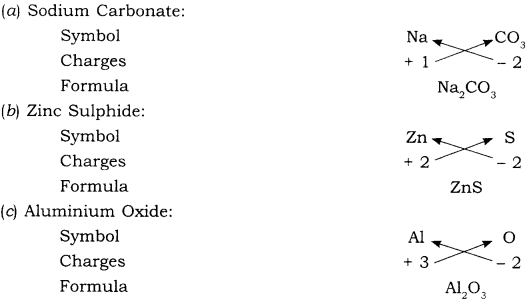 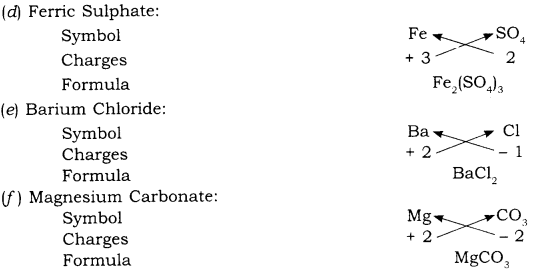 Question 1.
Which scientist gave the method to get gold from mercury?
(A) Nagarjuna
(B) Berzelius
(C) Dalton
(D) Rutherford
Answer: D

Question 8.
The person who first used the word valency was-
(A) Frankland
(B) Gaber
(C) Berzelius
(D) Priestley
Answer: A

Question 3.
Give one difference between a molecule and a radical.
Answer
The molecule does not carry any charge while a radical carries either a positive charge or a negative charge.

Question 7.
What do you mean by a chemical formula?
Answer
A group of symbols of elements which represents one molecule of a substance is called formula.
Example: Formula of water is H2O

Question 10.
Which of the following is trivalent? Sodium, magnesium, and aluminum.
Answer
Aluminum.

Question 12.
What are polyatomic ions? Give examples.
Answer
The ions which contain more than one atoms behaving as a single unit are called polyatomic ions. For example, po43-, co32-

Question 3.
Give the formulae of the compounds formed from the following sets of elements: 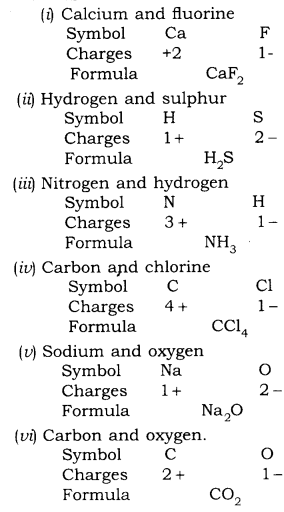 Question 5.
Find out the valency of the atoms represented by the figure (i) and (ii).
Answer 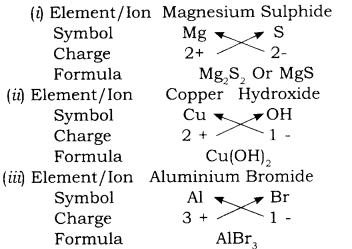 Question 8.
Why are ionic compounds hard?
Answer
The reason for hardness is due to the existence of strong electrostatic forces which bind the oppositely charged ions very tightly in a set pattern. Since these charged ions cannot be pulled apart easily, so ionic compounds are hard.

Question 1.
(A) Write the number of atoms present in
(a) SO2 molecule
(b) SO42-
(B) Write down the chemical formulae of
(a) Magnesium nitride
(b) Calcium nitrate
(c) Sodium nitrite
Answer
(A) (a) Three (b) Five

A chemical equation conveys many informations as described below:

Limitations of a chemical equation:

Question 3.
What is the meaning of the chemical formula of a compound? What information do we get from the formula? Write your answer by giving a suitable example.
Answer
The chemical or molecular formula of a substance represents the actual number of atoms of elements present in one molecule of that substance, in terms of symbols, e.g. formula of sodium chloride is NaCl, acetic acid is C2H4O2
A formula gives the following informa­tion:
(a) Formula represents 1 mole of the substance. For example, NaCl represents one mole or 02 x 1023 molecules of sodium chloride.
(b) The formula gives the name of all the elements present in the molecule. For example, elements in Na2SO4 are sodium (Na), sulphur (S), and oxygen (O).
(c) The formula gives information about the number of atoms of elements present in one molecule e.g. Na2SO4 tells that there are two-mole atoms of sodium (Na), a one-mole atom of sulphur (S) and four-mole atoms of oxygen (O) in the molecule.
(d) Molecular formula represents one gram molecular weight or molar mass of the substance. Atomic masses of sodium, sulphur and oxygen are 23, 32 and 16 respectively, so the molecular weight or molar mass of sodium sulphate (Na2SO4) is-
(23 x 2) + 32 + (16 x 4)
= 46 + 32 + 64 = 142
Also, the elements sodium, sulphur, and oxygen are present in the compound in the simplest ratio
23: 16: 8 parts by weight.

3. In some cases, the symbols have been derived from the Latin names of the elements.

The significance of symbol:

The significance of the formula:

6NaOH + 3CL→ NaClO3 + 5NaCl + 3H2O
It has all the atoms of the elements, balanced on both sides. This is a balanced chemical equation.