Question 1.
According to National forest policy, what percentage of geographical area of country the forests are necessary:
(a) 22 per cent
(b) 33 per cent
(c) 20 per cent
(d) 23 per cent
Answer:
(b).

Question 4.
Who was the leader of the Khejarali movement?
(a) Amrita Devi
(b) Ramoji
(c) Khejari Devi
(d) None of these
Answer:
(c).

Question 5.
Which of the following soils is good for growing cotton?
(a) Alluvial soil
(b) Black soil
(c) Red soil
(d) Laterite soil
Answer:
(b).

Question 4.
What is Bio-diversity?
Answer:
It means diversity in vegetation and domestic and wildlife found in a natural region.

Question 2.
Write about the measures of conservation of wildlife.
Answer:
Need to establish more and more of national parks, wildlife sanctuaries, biosphere reserves, etc. and also to conduct social forestry scheme and to develop a sense of environmental awareness in the public. There should be total prohibition on hunting.

Question 3.
Describe the things written about environment awareness in ancient time.
Answer:
Environment awareness is found in India right from the Vedic age. In different ancient texts, importance of environment and their conservation have been discussed. Indian saints have always considered the natural powers to be local deities. In ‘Bhoomi Sukta’ of Atharva Veda and in Yajur Veda it is asked to give respect to environment as gods and goddesses. Purity of water, natural elements mixture, awareness is discussed in Vedic texts. Respect towards trees is depicted in our great epics i.e., Ramayana and Mahabharata. In Puranas, cutting of trees has been described as a punishable offence. The earth has been regarded as the mother.
29 points related to environment conservation of Bishnoi samaj of Rajasthan are important rules of environment conservation.

The government is running several programmes and plans in the direction of forest conservation.
The important ones are:

Question 2.
Describe the types of forests and wildlife of Rajasthan.
Answer:
I. Types of Forests in Rajasthan:

Question 3.
Describe in brief the soils of Rajasthan.
Answer:
Soil is the topmost gift of nature. It is the great asset of farmers. The whole agricultural production depends upon it. Rajasthan is an agriculture-based state
and the supplementary occupation of people beside agriculture is animal rearing. It also increases the importance of soil.
Variation in natural environment gives birth to different types of soils. Climate, vegetation, time are the factors responsible for soil formation. Parent Rock, water, air and humus are four main components of soil.
Soil is a mixture of solid, liquid and gases which, is a result of inter-reaction among weathering of rocks, climate, plants and bacterias.
Types of soil found in Rajasthan: On the basis of colour, texture and fertility soils of Rajasthan is classified in five types.

Question 1.
Mark and label the following on an outline map of India. 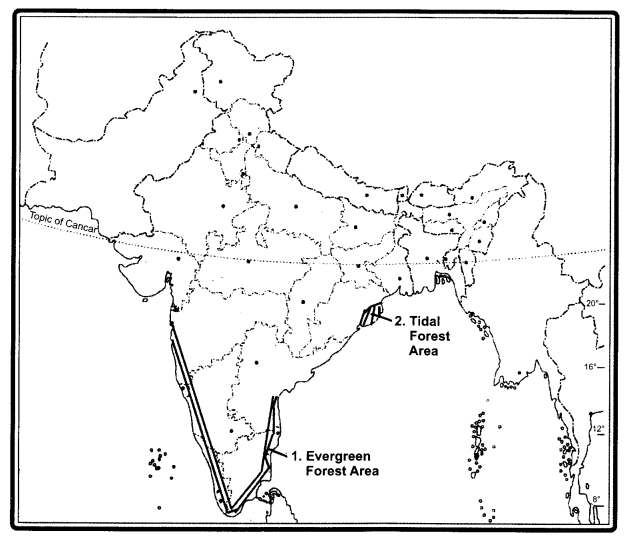 Question 2.
Bharatpur is famous for the
(a) Bird sanctuary
(b) Tiger resort
(c) Lion resort
(d) Conservation of fossils
Answer:
(a).

Question 4.
‘Dhokda’ is the major tree found in
(a) Jodhpur and Barmer
(b) Banswara and Udaipur
(c) Kota and Bundi
(d) Jaipur and Sikar
Answer:
(b).

Question 6.
The Forest Research Institute is in
(a) Jodhpur
(b) Jaipur
(c) Dehradun
(d) None of the above
Answer:
(c).

Question 7.
The type of forests found in the areas with less than 50 cm rainfall are:
(a) Dry thorny forests
(b) Evergreen forests
(c) Tidal forests
(d) Desert forests
Answer:
(d).

Question 8.
It is not one of the divisions of the natural vegetation:
(a) Forests
(b) Grasses
(c) Wild animals
(d) Scrubs/Bushes
Answer:
(c).

Question 10.
In which of the following states is black soil found?
(a) Jammu and Kashmir
(b) Rajasthan
(c) Gujarat
(d) Jharkhand
Answer:
(c).

Question 12.
How can the alluvial soil be classified on the basis of age?
(a) Bhangar and khadar
(b) Fertile and non-fertile
(c) Khadar and bhadar
(d) Bhadar and regur
Answer:
(a).

Question 13.
Which one of the soil types is the most widespread and important soil in India?
(a) Laterite soils
(b) Black soils
(c) Alluvial soils
(d) Red and yellow soils
Answer:
(c).

Question 7.
What is another name for the Tidal forests?
Answer:
The tidal forests are also called the Swamp forests.

Question 9.
What are the uses of teakwood?
Answer:
The teakwood is used for household works, furniture, tools and agriculture.

Question 6.
Write about the Khejarli Sacrifice movement in Rajasthan.
Answer:
The Khejari tree is considered the Kalpvraksha of Thar. On 28th August, 1730 the Maharaja of Jodhpur ordered to cut the Khejari trees in the village Khejrali. It was opposed by the villagers under the leadership of Amrita Devi. She sacrificed her life for the protection of the Khejari trees. About 363 villagers gave up their lives. This event is said to be the Khejarli Sacrifice movement. A monument has been constructed in the memory of martyrs of Khejarli village, where the Vriksh Sahid Mela (fair) is organised every year. In the memory of Amrita Devi, the Black Deer Sanctuary has been established in Jodhpur. The state government gives Amrita Devi Awards every year in the field of awareness for environmental conservation.

Question 9.
What does natural vegetation imply?
Answer:
Natural vegetation includes forests, grasses and scrubs. Most important of them are the forests. They are that part of the vegetation where vast groups of plants and trees are found. According to the National forest policy of India, 33% of geographical area of the country must be having the forests. There are temperate and. the tropical forests in India with variations in the states as well as in the country due to variations in the natural environment.

Question 10.
What is soil?
Answer:
Soil is the loose covering of fine rock particles that covers the surface of the earth. It consists of weathered particles of rocks brought down by wind, water and glaciers. It also includes decaying organic matter (humus) and minerals. It varies in texture and fertility. It takes a very long time to form.

Question 12.
Point out any three distinctions between Bhangar soils and Khadar soils.
Answer:

Question 16.
Discuss the importance of forests.
Answer:
Forests are important to us in a number of ways:

Question 1.
Throw light on the forest policy of India and the conservation of vegetation.
Answer:
Forests are the basis of life. Reckless destruction of forests in our country has affected adversely the climate and landscape, e.g. soil erosion, extension of desert, occurrence of floods, increase in wasteland, irregularity in climate, drought, fall in the level of underground water, loss of wildlife, environmental pollution, etc. The forests are being cleared to obtain more space for human habitation, agriculture and industries. Hence, it is compulsory to save and conserve forests to overcome the environmental hazards.

Besides the government is running various programmes and plans for the forest conservation. Social Forestry Scheme, Establishment of National Parks and Sanctuaries are some of them. The Forest Research Institute, Dehradun and the Central Arid Zone Research Institute, Jodhpur are making efforts to increase the land under forests and to check the expansion of deserts.
Different types of forest awards are given by the government of Rajasthan in order to encourage the efforts of forest conservation like Vaniki Pandit Award, Amrita Devi Award, Vriksha Vardhak Award, Vriksha Mitra Award, etc.

Question 2.
What is bio-diversity? Write about the conservation of bio-diversity in India.
Answer:
Abundance of diversities in vegetation and domestic and wild life in any natural region means bio-diversity.
India has 40% of the world’s bio¬diversities. There are about 81,000 animal and 45,000 vegetation species in India. The biodiversity is very important for the formation and consistency of nature. The environmental balance is maintained by plants and animals. Any sort of destruction of organism may be dangerous for nature and environment. The bio-diversity is being adversely affected, mainly due to the construction of large dams, industrialization, intensive cultivation, necessity of habitat and food for increasing population.

Loss of bio-diversity gives rise to many adverse situations as hole in ozone layer, increase in temperature, fall in rainfall, floods, droughts, pollution, expansion of deserts, etc. IUCN is working at the international level for the conservation of biodiversity. Its headquarter is at Switzerland.

It has become very essential to work for the conservation of biodiversity. Efforts are being made in our country to conserve it by developing National Parks, Wildlife Sanctuaries, Biosphere Reserves areas, etc. Major of them are the Indian Forest Research Institute at Dehradun; Indian Botanical Garden, Kolkata; Ecological Research Institute, Bangaluru, and National Environmental Institute, Nagpur; etc.

Question 4.
Classify the soils of India. Write the characteristics of the Arid soils and the Forest soils.
Answer:
The classification of soils is based on origin, colour, composition, texture and location.

The elephant is an important mammal. They are found in Assam, Karnataka and Kerala in hot humid forests (evergreen). One-horned rhino lives in marshy area of West Bengal and Assam; wild ass and camels live in Thar desert and Rann of Kachchh.
Indian buffaloes, cows, ox, nilgai, horses, chausingha (small deer) and variety of species of deer are some animals found in India. Many species of monkeys are also found here.
The natural habitat of Indian lions is Gir forest in Gujarat. Tigers are found in the forest of Jharkhand, Sunderban of West Bengal and Himalayan region.

Animals living in Himalayan region are strong enough to survive in harsh cold climate. In the ice-covered mountains of Ladakh, Yak is found which looks like an ox with curved-horns. Tibetian Barahsinga, Bharal, red panda are found here in some parts.

In rivers, lakes and oceanic region tortoises, crocodiles and alligators are found.
In India, many colourful birds are found. Among them peacocks, ducks, parrots, mainas, cranes, ostrich, owls, crows and pigeons are common species of birds which live in humid parts and forests.

Question 6.
Describe the natural vegetation of Rajasthan.
Answer:
About 10.12% of the total area (34,610 sq km) of Rajasthan has vegetations due to variations in climate, soil, location of land, etc. It has 3.83% forest cover which is less than whole India’s per individual forest cover 0.13 hectare. Three types of natural vegetation is found here. i.e., forests, grasses and scrubs (desert vegetation).
The classification and distribution of forests in Rajasthan:

Further, they are divided into seven sub-types:
(a) Dry teakwood forests:
These forests are found in 250-450 mt height. As teak is found in abundance they are named teakwood forests. They are extended in districts of Udaipur, Banswar, Jhalawar, Chittorgarh and Bar an. Teak is found in 50%-75%. Other trees are Tendu, Dhavda, Gurjan, Gondal, Khair, Semai, Reetta, Baheda and Tamarind (Imli). Toys are made of Tendu, Khair and Khirni. The teak cannot bear fog, hence found most in Southern Rajasthan. Its wood is used to manufacture tools and buildings.

(b) Salar forests:
These forests are found at 450 mt mountainous area. They are spread in the districts of Udaipur, Rajsamand, Chittore, Sirohi, Ajmer, Jodhpur, Alwar, Jaipur, etc. Wood is used in packing and furniture as well as gum and resin are received from Salar forests. Salar Dhok,
Katheera and Dhaved are main trees of this area. Due to abundance of Salar trees, they are called Salar forests.

(d) Dhokda forests or Mixed Deciduous forests:
Except desert region they are found in most of the regions of Rajasthan as environment other than desert region is suitable. Hence, they are the most extended forests in Rajasthan. They are found at 240-760 mt height. It is also known as Dhok and found in Kota, Bundi, Sawai Madhopur, Jaipur, Alwar, Ajmer, Udaipur, Rajsamand and Chittorgarh district of Rajasthan. These forests are included in main forest wealth of state. The wood of Dhok is very strong, it is converted into coal by burning. The other trees are Palash, Adusa, Jhadber, Arunj, Khair and Khirni, etc.

(g) Babool Forests:
They are found in districts of Ganganagar, Bikaner, Nagaur, Jallore, Alwar and Bharatpur. Where less moisture is found their number decreases but as the moisture increases their number also increases.