Question 1.
Which of the following natural disaster is not related to India?
(a) Earthquake
(b) Flood
(c) Landslide
(d) Volcano
Answer:
(d).

Question 3.
The major landslide occurs in the mountainous region of India is:
(a) Aravalli
(b) Himalaya
(c) Satpura
(d) Vindhyachal
Answer:
(b).

Question 2.
What is an earthquake?
Answer:
When any part of the earth has vibrations due to any event occurs in side the earth is called an earthquake.

Question 3.
What do you understand by landslide?
Answer:
Process of rolling down soil and rocks from upper slopes is called rock sliding. If the rock sliding is in a great scale then a sound of thunder occurs.

Question 4.
What is flood?
Answer:
When due to heavy rainfall water in rivers spread on large area by breaking bank is called flood.

Question 1.
What do you understand by management?
Answer:
Management is a process done by an individual society and government level before and after the disaster to control the loss of property and lives.

Question 2.
In which parts of India earthquakes are common and why?
Answer:
The Northern mountains and foothills, i.e. Himalayas are the most earthquake- prone area in India because it is young fold mountain which are not stable and still under the process of formation.

Question 4.
Explain Trikal.
Answer:
When such a less rainfall occur so, no production of grain, fodder and insufficient availability of drinking water occur it is called Trikal.

Question 6.
In which country deaths were occur first time due to Anthrax?
Answer:
The USA is the country where first time deaths occurred due to use of Anthrax.

Question 1.
How can the natural disaster of earthquake be tackled?
Answer:
Earthquake can be tackled by the following:

Question 4.
What are the ways to check drought?
Answer:
The most greatest danger of drought is famine, less availability of water increased the intensity of famine. There are three forms of famine, occurred by drought.

Drought Management
Ways to Check Drought: Joint river plans should be implemented so excess water of rivers should be supply to less availability areas. It would increase the level of under ground water and would indirectly help in developing greenery.
At individual level, it is the most important that one should understand the importance of water. One should personally take interest in water collection and conservation Kachcha and Pucca tank should be built which will help in increasing underground level of water while other for utilising water when rain do not occur. Water should be collected by making wall around the land. So, water will slap-down less water. Consuming seeds should be grown. Eyeiyone should help each other at the time of famine.

Question 1.
When did the National Flood Control Plan launch?
Answer:
It was launched in the year 1954 by forecasting the weather reports.

Question 6.
What is double famine?
Answer:
When production of crops and fodder fail due to less rainfall, it is called double famine.

Question 7.
Name the winter rainfall in North India that is useful for rabi crops.
Answer:
Mavat

Question 3.
Write the cyclone-prone areas in India.
Answer:
Sea storms of Arabian Sea during April to June are parallel to west to West Bengal’s cyclones. They affect Andhra Pradesh, Telangana, Odisha and West Bengal during October to December.

Question 1.
Differentiate between the natural and man-made causes of earthquake.
Answer:
When any part of the earth has vibrations due to any event occurs inside the earth is called an earthquake. It is one of the greatest destructive calamities. It can cause great destruction in a moment.
Earthquakes intensity can be measured by an instrument seismograph in Richter scale. It was discovered by Charles Richter so it is named after him. On this intensity of an earthquake could be measured up to 12 up to 5. It is said normal as the speed increases it takes the most destructive form.

Causes of Earthquake:
It is caused due to movement tectonic of plates of earth. Contraction and expansion due to vapour inside the earth is also a cause of earthquake.

Earthquake Prone Area:
If we study the earthquake occurred in India we conclude that Northern mountains and foot hills is the most young fold mountain. Himalaya is the part of this young fold mountain which is still in the stage of formation. Still the balanced stage is not developed in Himalayas. Hence it is the most earthquake prone area while Deccan plateau is a balanced and stable part of earth but after the earthquake of Koyna and Latoor this region is also considered as earthquake zone region of Kachch and Bhuj of Gujarat is also falls in earthquake zone.

Earthquake a danger:
It is a natural disasters which cause the greatest change in a moment on earth which shock the heart of people. It causes thousands of death, cracks in earth surface, destruction of roads, collapse of buildings which convert into heap of soil and stones. Bridges, dams collapse and become danger in future. Relief from Earthquake and Management:
At the level of society and government: All government take relief and help measures after earthquake toll of death in India is high as it is densely populated. Hence it is necessary to implement network of instrument related to earthquake measures. So possibility of destruction of lives and property could be decrease and an alert can be declared through TV and radio to make people aware.

Question 2.
Write a short notes on cyclones.
Answer:
Sea storms are called cyclones in India. They originate in hot currents and enter in India from Indian ocean then crossing Bay of Bengal reach to India as well as from Arabian sea. They are less humid when they reach to coastal regions cause heavy rainfall as they move interior amount rainfall goes on decreasing due to high speed and heavy rainfall they cause destruction in coastal regions.

Causes of origin due to condensation and evaporation in summer season an around the surface of ocean moves up and cause low pressure to fill it arid enters from all sides this cause cyclones or storms. Their impact depends upon temperature in North Western India and centre of low pressure. In winters also cyclones occurs in North west India they cause rain in winters in North West India called “Mawaf useful for Rabi crop.

Question 3.
Describe the chemical and industrial accidents and its measures.
Answer:
Technical and scientific development has increased the use of chemicals in daily life in the form of chemical fertilizers, pesticides, insecticides, chlorination to purify water plants, etc. These simple chemicals have polluted the atmosphere. Some dangerous chemicals are found in every house like hair spray, deodorant, nail-paint, nail paint remover, toilet cleaner. Some very sensitive flamable and cheap explosive chemicals are used by terrorists which cause great accidents. Unsafe use of their chemicals and their storage as well as leakage is harmful to whole community.

In India in 1984 leakage of Poisonous gas from insecticide manufacturing industry Union Carbide in Bhopal city took 3000 lives in few hours, those who left are suffering from diseases.
Security Measures

For disaster one reason is not responsible but combined reasons are responsible. External and internal forces of earth directly affect the disaster, for example, Earthquake, Volcano etc. unwise and continuous exploitation of resources by man, use of earth in different ways by growing population have deformed the earth. Deforestation, weathering of rocks, water crises are the result of such activities. Such problems have given birth to global warming.
All these above mentioned causes are combinedly responsible for natural calamities.

Natural balance is disturbed by man due to man’s greedyness and consumer satisfaction view. For his blind development he has disturbed the balance of nature. Man’s activity are indirectly inviting these natural disaster.
Classification of Natural disaster on the basis of origin:

Question 1.
Shade the earthquake affected area on the political map of India.
Answer: 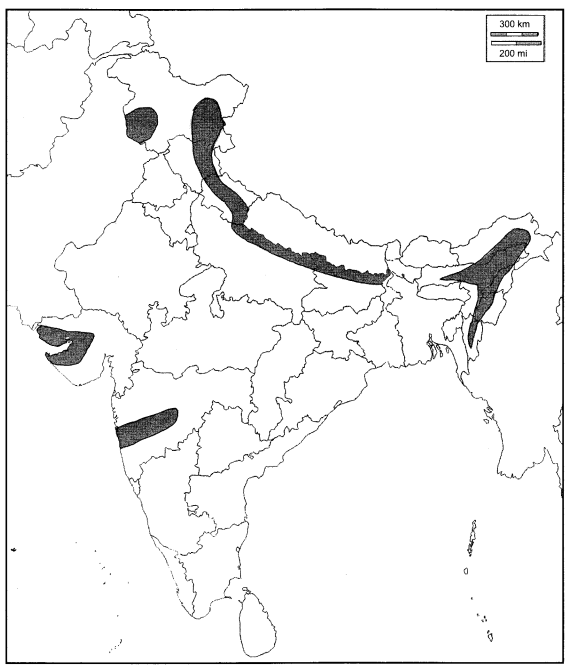 Question 2.
Shade the landslide regions on the political map of India.
Answer: 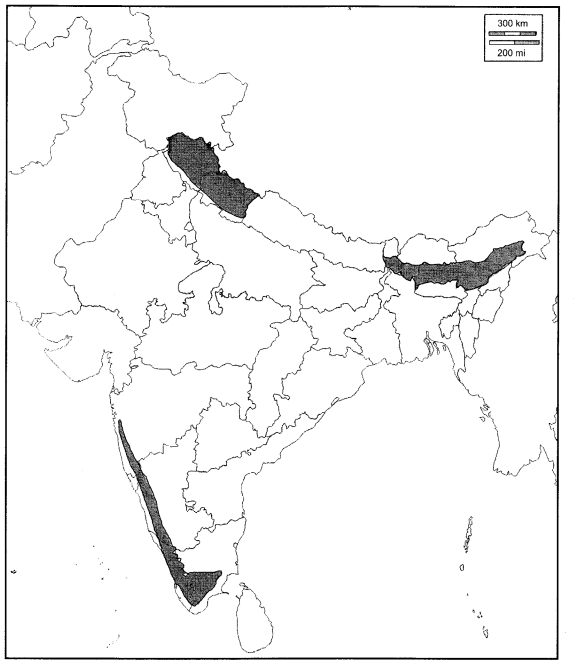 Question 3.
Mark the flood prone region on the political map of India.
Answer: 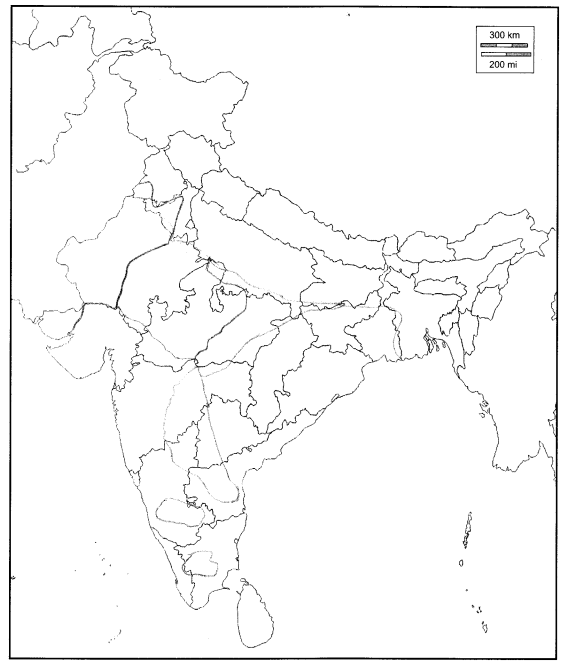