Question 3.
Fill in the blanks.

Question 1.
A musical instrument takes 2 seconds to complete 200 oscillations then calculate frequency of it.
Answer:

Question 2.
The ringing bell in a temple has frequency 400 vibration/sec, then calculate the periodic time of it.
Answer:

Question 1.
Draw an human vocal system diagram and explain its working principle.
Answer:
The sound is produced by the voice of sound box or the larynx in human. It is located in the throat. Below to it is the wind pipe. The two vocal cords, are stretched across the voice box or larynx in such a way that it leaves a narrow slit between them for the passage of air. When the lungs force air through the slit, the vocal cords vibrate and the vibration results in sound.

Preventive and control of noise:
In the modern society we can not eliminate noise, but can lower its level to bearable limits by taking following measures:

Question 3.
Explain the process of receiving the sound signals to brain with labelled diagram of human ear. 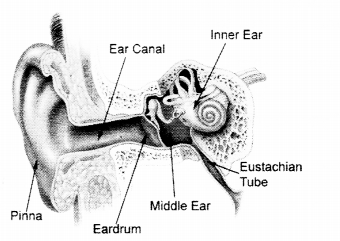 Question 4.
How is sound transmitted in solid and gases? Explain it.
Answer:
Sound travels through different medium:
(a) Sound transmission in gas:
Sound travels through air from its place of origin and reaches to our ears. In air it travels through vibration, when object vibrates, then atoms of air also vibrates, every vibrated atom transfer propagates this vibration to next atoms. In this way a wave of sound reaches to our ear where it strikes with the ear drum, and it starts vibrating and we listen sound.
(b) Sound transmission in solid:
Take lm scale, 2 cm long metal wire and 2 m long thread, keep one end of the scale on owner and ask your friend to create sound by light rubbing of other end of scale with nails. Repeat the same by stretching and rubbing metal wire and thread. The vibrations produced at first end reaches to the other end. Hence, it is clear that sound also travels through solids. In labs when turning forks are vibrated and brought near to the ear, sound is heard.

Question 3.
The number of virbration/oscillation executed per second is known as:
(a) Frequency
(b) Amplitude
(c) Wave length
(d) Pitch

Question 5.
Loudness of sound depends upon-
(a) Wave length
(b) Speed of sound
(c) Amplitude
(d) None of these

Question 6.
The sound of frequency less than 20 Hertz is known as
(a) Ultra sonic
(b) Infra sonic
(c) Sonic
(d) None of these

Question 8.
The sound in the audible range is called-
(a) Ultra sonic
(b) Sonic
(c) Sub sonic
(d) Light sound

Question 9.
Eardrum is a part of
(a) Hearing organ
(b) Sound producing organ
(c) Muscular system
(d) None of these

Question 10.
The pitch of sound depends upon the
(a) amplitude
(b) wave velocity
(c) wave length
(d) frequency

Question 12.
The sound used in sonography is
(a) Infrasonic
(b) Audiable
(c) Ultrasonic
(d) None of these

Question 1.
What is sound?
Answer:
Sound is a form of energy which usually produces the sensation of hearing in our ears.

Question 3.
Can sound propagate through vacuum?
Answer:
No, its need material medium for its propagation.

Question 4.
What is time period? Write its S.I unit.
Answer:
The time taken by one complete oscillation in the density of the medium is called time period. It is denoted by the capital letter T. Its S.I unit is second.

Question 5.
What is frequency? How is it represented? Write its S.I unit.
Answer:
The number of vibration/oscillation per second is called the frequency of the wave. It is represented by the symbol v (nu). Its S.I unit is Hertz (Hz).

Question 6.
What do you mean by the term loudness?
Answer:
The sound of high amplitude is called loudness.

Question 7.
What is amplitude?
Answer:
The maximum displacement of the vibrating object about its mean position is called amplitude.

Question 8.
What type of sound waves does a bat, rat, and whale produced?
Answer:
Ultra sound.

Question 10.
What is the frequency of a wave whose time period is 0.05 second?
Answer:
Frequency is defined as the wave passing through a point in second.

Question 12.
What is embryo death?
Answer:
Few people are identifying the sex of a child, during pregnancy and they found that the infant child is girl and make abortion, this is called embryo death.

Question 13.
What is audible sound range?
Answer:
The sound having frequency 20 Hz to 20000 Hz can be heard by us is called
audible sound.

Question 15.
How do we feel sound?
Answer:
Sound produces vibration in eardrum. It send to brain through ear cavity by which we feel sound.

Question 5.
What is noise pollution. How can we control noise pollution?
Answer:
As we know that the unpleasant sounds are called noise. High pitched noise is usually more annoying than low pitched noise. Noise can damage the ears, cause of tiredness and loss of concentration. If it is very loud, it may even result in sickness and temporary deafness. Some commonly heard noise are those made by flying air craft, moving vehicles, greatly amplified music, and machinery including domestic appliances.
Such unwanted noise can be reduced by:

Question 1.
Differentiate between Loundness and Pitch.
Answer:
The following are the differences between loundness and pitch: