General Instructions to the Examinees :

Read the following passage carefully and answer the questions that follow : [7]
Passage-1
An every country people imagine that they are the best and the cleverest and the others are not so good as they are. The English-man thinks that he and his country are the best; the Frenchman is very proud of France and everything French. The Germans and Italians think no less of their countries and many Indians imagine that India is in many ways the greatest country in the world. This is wrong. Everybody wants to think well of himself and his country. But really there is no person, who has not got some good and some bad qualities.

In the same way there is no country which is not partly good and partly bad. We must take the good wherever we find it and try to remove the bad whatever it may be. We are, of course, most concerned with our own country, India. Unhappily, it is in a bad way today. Most of our people are poor and unhappy. They have no joy in their lives. We have to find out how we can make them happier. We have to see what is good in our ways and customs and try to keep it, and whatever is bad we have to throw away. If we find anything good in other countries, we should certainly take it.

Question 1.
What do people think in every country?

Question 2.
What do Indians imagine?

Question 3.
What do the Europeans think?

Question 4.
In what respect is India is a bad way today?

Question 5.
Find word from the passage which mean- Human beings.

Read the following passage carefully and answer the questions : [7]
Passage-2
Pandit Ravi Shankar, the brilliant sitarist, has done a signal service to the country by carrying the banner of Indian music across the world. He has done more than any other musician to arouse the interest of the westerners in Indian music, thus earning himself, the title, “India’s musical ambassador.’ Born in Varanasi in 1920, Ravi Shankar began as a ballet dancer with his elder brother Uday Shankar’s troupe. But he left the troupe to learn the sitar under Ustad Allauddin Khan of Maihar.

He underwent rigorous training practising for nearly eighteen hours a day to gain command over the instrument. Ravi Shankar toured Europe and America in the 1960’s, where he gave several sitar recitals. He has composed tunes for light music, choral singing and orchestra. The popular tune of Saare Jahan Se Achchha, was composed by him in 1945. He composed music for films like Meera, Goddan and Anuradha His long list of awards includes the Padma Vibhushan, the Magsaysay Award (1992) and the 1998 Polar Music Prize considered the Nobel Prize of Music. In 1999 he was awarded the Bharat Ratna.

Question 6.
What service has Pandit Ravi Shankar done for the country?

Question 8.
When and where was Pandit Ravi Shankar born?

Question 9.
Why did he leave his brother’s troupe?

Question 10.
Find word from the passage which means ‘singing in a group’.

Question 11. [5]
You are Avinash living in a hostel. Last Sunday your science teacher took you and your classmates on a picnic on a riverside where you saved a drowning classmate. Write a letter to your mother describing the incident. You may take help of the following points
(i) Pleasant weather, decided to go on a picnic.
(ii) Packed eatables and other essentials, went on bicycles.
(iii) Enjoyed singing, dancing, and boating.
(iv) A classmate didn’t know how to swim.
(v) Saw him sinking, shouting for help.
(vi) Happy to have him saved.
(vii) Rewarded by his parents and the institution.
OR
Write a letter to the Editor of Nav Bharat Times on the reckless driving of mini buses in Jaipur.

Question 13.
Write a paragraph in about 75 words on the natural scene given in the picture. [5] 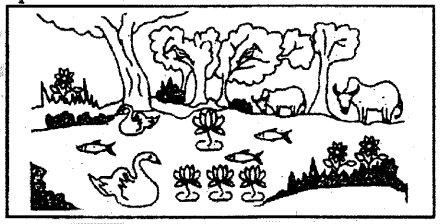 Question 15.
Join the following sentences using the relative pronouns/adverbs given in brackets- [2 × 1½ = 3]
(i) Anil supported the movement. The movement was started by his friend. (that)
(ii) Harish is a painter. His son is an engineer. (whose)

Question 19.
Read the passage given below and answer the questions that follow : [4 × 1 = 4]
Time: The Twenty Fifth century.
Place: The Museum of Ancient History : Department of the Twentieth Century of the Planet Earth.
Before Rise: Spotlight shines on Historian, who is sitting at a table down right, on which is a movie projector. A sign on an easel beside her reads- Museum of Ancient History : Department of the Twentieth Century. She stands and bows to audience.
Historian: Good afternoon. Welcome to our Museum of Ancient History, and to my department curiosities of the good old, far-off twentieth century. The twentieth century was often called the Era of the Book. In those days, there were books about everything, from anteaters to Zulus. Books taught people how to, and when to, and where to, and why to. They illustrated, educated, punctuated, and even decorated. But the strangest thing a book ever did was to save the Earth. You haven’t heard about the Martian invasion of 2040?
Questions :
(i) What time and place has been discussed in the passage?
(ii) How does the historian welcome to the audience?
(iii) Why and by which name was the twentieth century called?
(iv) Write the word from the passage which means: ‘ancient’.

Question 20.
Read the following passage carefully and answer the questions that follow : [4 × 1 = 4]
I reflected on my life in the U.S.A. There, when prejudice is felt, it is open, obvious, blatant; the white man makes his position very clear, and the black man fights those prejudices with equal openness and fervour, using every constitutional device available to him. The rest of the world in general and Britain in particular are prone to point an angrily critical finger at American intolerance, forgetting that in its short history as a nation it has granted to its Negro citizens more opportunities for advancement and betterment per capita, than any other nation in the world with an indigenous Negro population.

Each violent episode, though greatly to be deplored, has invariably preceded some change, some improvement in the American Negro’s position. The things they have wanted were important enough for them to fight and die for, and those who died did not give their lives in vain. Furthermore, American Negroes have been generally established in communities in which their abilities as labourer, artisan, doctor, lawyer, scientist, educator and entertainer have been directly or indirectly of benefit to that community; in terms of social and religious intercourse they have been largely independent of white people.

(i) What prejudice did the speaker feel in the U.S.A.?
(ii) What is the policy of America for Negro in the eyes of other countries of the world?
(iii) What do Americans want from Negros?
(iv) Write from the passage the word which means: “living naturally in a particular region.’

Question 21.
Answer any one of the following two questions in about 60 words : [1 × 3 = 3]
(i) What did Bishnois sacrifice their lives for? (The Tale of the Bishnois)
(ii) How did Babuli differentiate between his student life and the present life? (The Tribute)

Question 23.
Explain any one of the following stanzas with reference to the context : [1 × 4 = 4]
(i) The person who risk nothing,
does nothing, has nothing,
is nothing and becomes nothing.
They may avoid suffering and sorrow,
but they cannot learn, feel, change, grow, love, live.

(ii) But soon a wonder came to light,
That show’d the rogues they lied;
The man recover’d of the bite,
The Dog it was that died.

Question 24.
Answer any two of the following questions in about 30–40 words :  [2 × 2½ = 5]
(i) Who is the friend that could help and make the poet happy? (My Good Right Hand)
(ii) What is the symbol of the victory of the lotus? (The Lotus)
(iii) What did the people do when they listened about the incident of biting the mad dog to the man?

Question 25.
Answer any one of the following questions in about 80 words :  [1 × 5 = 5]
(i) How can you say that Hari Singh was a successful thief? (The Thief’s Story)
(ii) Write a brief character sketch of Corporal Turnbull? (The Man who Knew Too Much).

Question 27.
Answer any one of the following questions in about 20–25 words :  [1 × 2 = 2]
(i) What did Bholi’s mother say after receiving the proposal from Bishamber?. (Bholi)
(ii) What did the peasant say when he lost his breakfast? (The Imp and the Peasant’s Bread)